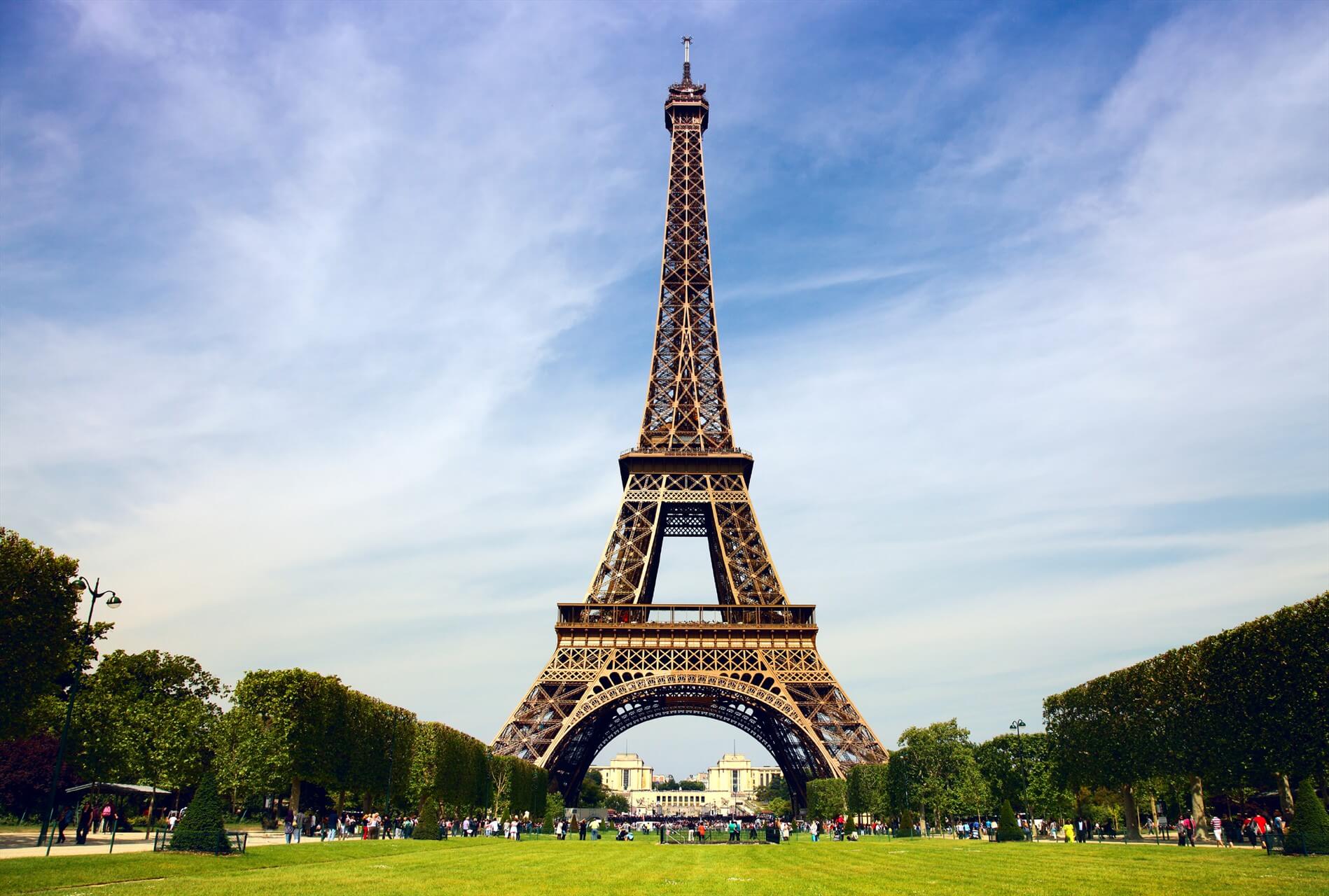 France ), officially the French Republic ), is a country consisting of metropolitan France in Western Europe and several overseas regions and territories. The metropolitan area of France extends from the Mediterranean Sea to the English Channel and the North Sea, and from the Rhine to the Atlantic Ocean. It borders Belgium, Luxembourg and Germany to the northeast, Switzerland, Monaco, and Italy to the east, and Andorra and Spain to the south. The overseas territories include French Guiana in South America and several islands in the Atlantic, Pacific and Indian oceans. The country's 18 integral regions span a combined area of 643,801 square kilometres and a total population of 67.07 million . France is a unitary semi-presidential republic with its capital in Paris, the country's largest city and main cultural and commercial centre. Other major urban areas include Lyon, Marseille, Toulouse, Bordeaux, Lille and Nice. France, including its overseas territories, has the most time zones of any country, with a total of 12. During the Iron Age, what is now metropolitan France was inhabited by the Gauls, a collection of Celtic tribes. The area was annexed by Rome in 51 BC, developing a distinct Gallo-Roman culture that laid the foundation of the French language. The Germanic Franks arrived in 476 and formed the Kingdom of Francia, which became the heartland of the Carolingian Empire. The Treaty of Verdun of 843 partitioned the empire, with West Francia becoming the Kingdom of France in 987. For much of the High Middle Ages, France was a highly decentralized feudal kingdom in which the authority of the king was barely felt. King Philip Augustus achieved remarkable success in the strengthening of royal power and the expansion of his realm, doubling its size and defeating his rivals. By the end of his reign, France had emerged as the most powerful state in Europe. In the mid-14th century, French monarchs were embroiled in a series of dynastic conflicts with their English counterparts, which lasted over 100 years. Emerging victorious from said conflicts, disputes with Spain and the Holy Roman Empire soon followed during the Renaissance but were ultimately less successful. However, French culture flourished and a global colonial empire was established, which by the 20th century would become the second largest in the world. The second half of the 16th century was dominated by religious civil wars between Catholics and Protestants , which severely weakened the country. But France once again emerged as Europe's dominant cultural, political, and military power in the 17th century under Louis XIV following the Thirty Years' War. An inadequate financial model and inequitable taxation system as well as endless and costly wars to maintain its predominant position, the Seven Years' War and American War of Independence among them, left the heavily indebted kingdom in a precarious situation by the end of the 18th century. The French Revolution in 1789 saw the fall of the absolute monarchy that characterized the Ancien Régime and from its ashes, rose one of modern history's earliest republics, which drafted the Declaration of the Rights of Man and of the Citizen. The declaration expresses the nation's ideals to this day. Following the revolution, France reached its political and military zenith in the early 19th century under Napoleon Bonaparte, subjugating much of continental Europe and establishing the First French Empire. The French Revolutionary and Napoleonic Wars shaped the course of European and world history. After the collapse of the empire and a relative decline, France endured a tumultuous succession of governments culminating in the establishment of the French Third Republic in 1870 in the midst of the Franco-Prussian War. France was one of the prominent participants of World War I, from which it emerged victorious, and was one of the Allied powers in World War II, but came under occupation by the Axis in 1940. Following liberation in 1944, a Fourth Republic was established and later dissolved in the course of the Algerian War. The Fifth Republic, led by Charles de Gaulle, was formed in 1958 and remains to this day. Algeria and nearly all other French colonies became independent in the 1960s, with most retaining close economic and military connections with France. France retains its centuries-long status as a global centre of art, science, and philosophy. It hosts the world's fifth-largest number of UNESCO World Heritage Sites and is the leading tourist destination, receiving over 89 million foreign visitors in 2018. France is a developed country with the world's seventh-largest economy by nominal GDP, and the tenth-largest by PPP. In terms of aggregate household wealth, it ranks fourth in the world. France performs well in international rankings of education, health care, life expectancy, and human development. It remains a great power in global affairs, being one of the five permanent members of the United Nations Security Council and an official nuclear-weapon state. France is a founding and leading member of the European Union and the Eurozone, and a member of the Group of 7, North Atlantic Treaty Organization , Organisation for Economic Co-operation and Development , the World Trade Organization , and La Francophonie.

The Bibliothèque nationale de France is the national library of France, located in Paris. It is the national repository of all that is published in France and also holds extensive historical collections.

The Musée d'art moderne et d'art contemporain , also known as MAMAC, is a museum dedicated to modern art and contemporary art. It opened on 21 June 1990, in Nice, France.

The Musée Fabre is a museum in the southern French city of Montpellier, capital of the Hérault département. The museum was founded by François-Xavier Fabre, a Montpellier painter, in 1825. Beginning in 2003, the museum underwent a 61.2 million euro renovation, which was completed in January 2007. It is one of the main sights of Montpellier and close to the city's main square, the Place de la Comédie. The museum's national importance is recognised by it being classified as a Musée de France by the Ministry of Culture .

The Palace of Versailles vɛʁsɑj] ) was the principal royal residence of France from 1682, under Louis XIV, until the start of the French Revolution in 1789, under Louis XVI. It is located in the department of Yvelines, in the region of Île-de-France, about 20 kilometres southwest of the centre of Paris.A simple hunting lodging and later a small château with a moat occupied the site until 1661, when the first work expanding the château into a palace was carried out for Louis XIV. In 1682, when the palace had become large enough, the king moved the entire royal court and the French government to Versailles. Some of the palace furniture at this time was constructed of solid silver, but in 1689 much of it was melted down to pay for the cost of war. Subsequent rulers mostly carried out interior remodeling, to meet the demands of changing taste, although Louis XV did install an opera house at the north end of the north wing for the wedding of the Dauphin and Marie Antoinette in 1770. The palace has also been a site of historical importance. The Peace of Paris was signed at Versailles, the Proclamation of the German Empire occurred in the vaunted Hall of Mirrors, and World War I was ended in the palace with the Treaty of Versailles, among many other events. The palace is now a historical monument and UNESCO World Heritage site, notable especially for the ceremonial Hall of Mirrors, the jewel-like Royal Opera, and the royal apartments; for the more intimate royal residences, the Grand Trianon and Petit Trianon located within the park; the small rustic Hameau created for Marie Antoinette; and the vast Gardens of Versailles with fountains, canals, and geometric flower beds and groves, laid out by André le Nôtre. The Palace was stripped of all its furnishings after the French Revolution, but many pieces have been returned and many of the palace rooms have been restored. In 2017 the Palace of Versailles received 7,700,000 visitors, making it the second-most visited monument in the Île-de-France region, just behind the Louvre and ahead of the Eiffel Tower.

The Musée Ingres is located in Montauban, France. It houses a collection of artworks and artifacts related to Jean Auguste Dominique Ingres, and works by another famous native of Montauban, Antoine Bourdelle. In 1851, Ingres, at 71 years of age, gave part of his collection, including copies, work of pupils, and Greek vases, as a gift to the city of his birth. The Ingres room was inaugurated in 1854. The death of Ingres in January 1867 led to a considerable enrichment of the collection with additional works, in particular several thousands of drawings. The museum is located in a building that once served as the residence of the bishops of Montauban. The structure belongs chiefly to the 17th century, but some portions are much older, notably an underground chamber known as the Hall of the Black Prince . During World War II, the Musée Ingres served as one of the temporary places of storage for the Mona Lisa, evacuated from the Louvre at the beginning of the war. A renovation carried out between 1951–1958 made Musée Ingres a modern institution according to the designs of the time, equipped with additional inventories. Among the paintings by Ingres in the collection are: Joseph Ingres Jean-François Gilibert Lorenzo Bartolini The Dream of Ossian Christ Giving the Keys to St. Peter Roger Freeing Angelica Madame Henri Gonse Jesus among the Doctors

The Musée Lambinet is a municipal museum in Versailles telling the history of the town. Since 1932 it has been housed in the hôtel Lambinet, a hôtel particulier designed by Élie Blanchard, built in the second half of the 18th century by a part of the Clagny lake and left to the town of Versailles by the heirs of Victor Lambinet in 1929. It has been classed as a monument historique since 1944. Its garden façade has a sculpted pediment representing an allegorical figure of architecture. The museum has 35 rooms, some with period decor, in which collections on the town's history are displayed, such as furniture, ceramics and objets d'art as well as historic plans of the town and paintings, sculptures and other works of art by artists from the town .

The Musée Hébert is a museum located in the Hôtel de Montmorency-Bours at 85, rue du Cherche-Midi, in the 6th arrondissement of Paris, France. It has been closed since 2004 for renovations. The museum is housed within the Petit-Montmorency, constructed in 1743 by the Comte de Montmorency, and former home of academic painter Ernest Hébert . After his adopted son's death in 1974, the building became state property and opened as a museum in 1984. Since 2004, the museum Hébert has been affiliated with the Musée d’Orsay, and indefinitely closed for renovations. The museum contains collections of Hébert's work, furniture, decorative items, souvenirs, and photographs, set within rooms almost unchanged since the 18th century. His paintings include portraits of literary critic Jules Lemaître, and two noted grandes horizontales, La Païva and Madame de Loynes.