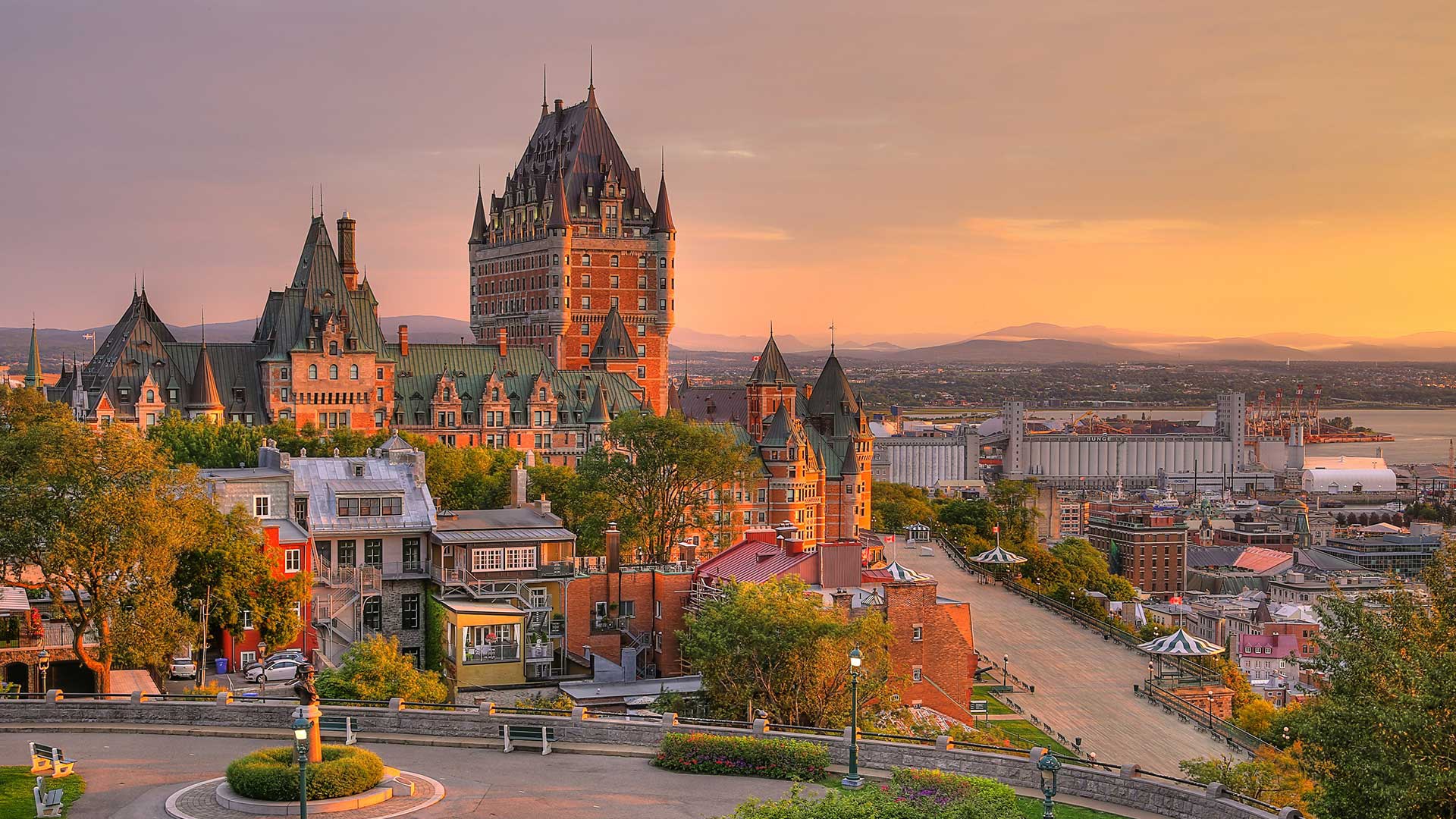 Canada is a country in the northern part of North America. Its ten provinces and three territories extend from the Atlantic to the Pacific and northward into the Arctic Ocean, covering 9.98 million square kilometres , making it the world's second-largest country by total area. Its southern and western border with the United States, stretching 8,891 kilometres , is the world's longest bi-national land border. Canada's capital is Ottawa, and its three largest metropolitan areas are Toronto, Montreal, and Vancouver. Various indigenous peoples inhabited what is now Canada for thousands of years before European colonization. Beginning in the 16th century, British and French expeditions explored and later settled along the Atlantic coast. As a consequence of various armed conflicts, France ceded nearly all of its colonies in North America in 1763. In 1867, with the union of three British North American colonies through Confederation, Canada was formed as a federal dominion of four provinces. This began an accretion of provinces and territories and a process of increasing autonomy from the United Kingdom. This widening autonomy was highlighted by the Statute of Westminster of 1931 and culminated in the Canada Act of 1982, which severed the vestiges of legal dependence on the British parliament. Canada is a parliamentary democracy and a constitutional monarchy in the Westminster tradition, with a monarch and a prime minister who serves as the chair of the Cabinet and head of government. The country is a realm within the Commonwealth of Nations, a member of the Francophonie and officially bilingual at the federal level. It ranks among the highest in international measurements of government transparency, civil liberties, quality of life, economic freedom, and education. It is one of the world's most ethnically diverse and multicultural nations, the product of large-scale immigration from many other countries. Canada's long and complex relationship with the United States has had a significant impact on its economy and culture. A developed country, Canada has the seventeenth-highest nominal per-capita income globally as well as the thirteenth-highest ranking in the Human Development Index. Its advanced economy is the tenth-largest in the world, relying chiefly upon its abundant natural resources and well-developed international trade networks. Canada is part of several major international and intergovernmental institutions or groupings including the United Nations, NATO, the G7, the Group of Ten, the G20, the United States–Mexico–Canada Agreement and the Asia-Pacific Economic Cooperation forum.

National Trust for Places of Historic Interest or Natural Beauty

The National Trust for Places of Historic Interest or Natural Beauty, commonly known as the National Trust, is a charity and membership organisation for heritage conservation in England, Wales and Northern Ireland. In Scotland, there is a separate and independent National Trust for Scotland. The Trust was founded in 1895 by Octavia Hill, Sir Robert Hunter and Hardwicke Rawnsley to "promote the permanent preservation for the benefit of the Nation of lands and tenements of beauty or historic interest". It was given statutory powers, starting with the National Trust Act 1907. Historically, the Trust acquired land by gift and sometimes by public subscription and appeal, but after World War II the loss of country houses resulted in many such properties being acquired either by gift from the former owners, or through the National Land Fund. Country houses and estates still make up a significant part of its holdings, but it is also known for its protection of wild landscapes such as in the Lake District and Peak District. As well as the great estates of titled families, it has acquired smaller houses including some whose significance is not architectural but through their association with famous people, for example the childhood homes of Paul McCartney and John Lennon. One of the largest landowners in the United Kingdom, the Trust owns over 248,000 hectares of land and 780 miles of coast. Its properties include over 500 historic houses, castles, archaeological and industrial monuments, gardens, parks and nature reserves. Most properties are open to the public for a charge , while open spaces are free to all. The Trust has an annual income of over £630 million, largely from membership subscriptions, donations and legacies, investments, entrance fees to properties, and profits from its shops and restaurants. It also receives grants from a variety of organisations including other charities, government departments, local authorities and the National Lottery Heritage Fund.

The Art Gallery of Ontario is an art museum in Toronto, Ontario, Canada. The museum is located in the Grange Park neighbourhood of downtown Toronto, on Dundas Street West between McCaul and Beverley streets. The museum's building complex takes up 45,000 square metres of physical space, making it one of the largest art museums in North America. In addition to exhibition spaces, the museum also houses an artist-in-residence office and studio, dining facilities, event spaces, gift shop, library and archives, theatre and lecture hall, research centre, and a workshop. Established in 1900 as the Art Museum of Toronto, and formally incorporated in 1903. It was renamed to the Art Gallery of Toronto in 1919, before it adopted its present name, the Art Gallery of Ontario, in 1966. The museum acquired the Grange in 1911 and later undertook several expansions to the north and west of the structure. The first series of expansions occurred in 1918, 1924, and 1935, designed by Darling and Pearson. Since 1974, the gallery has undergone four major expansions and renovations. These expansions occurred in 1974 and 1977 by John C. Parkin, and 1993 by Barton Myers and KPMB Architects. From 2004 to 2008, the museum underwent another expansion by Frank Gehry. The museum complex saw further renovations in the 2010s by KPMB, and Hariri Pontarini Architects. The museum's permanent collection includes over 98,000 works spanning the first century to the present day. The museum collection includes a number works from Canadian, First Nations, Inuit, African, European, and Oceanic artists. In addition to exhibits for its collection, the museum has organized and hosted a number of travelling art exhibitions.

The Ursuline Monastery of Quebec City, , was founded by a missionary group of Ursuline nuns in 1639 under the leadership of Mother Marie of the Incarnation, O.S.U. It is the oldest institution of learning for women in North America. Today, the monastery serves as the General Motherhouse of the Ursuline Sisters of the Canadian Union. The community there also operates an historical museum and continues to serve as a teaching centre.The complex was designated a National Historic Site of Canada in 1972.

The National Gallery of Canada , located in the capital city of Ottawa, Ontario, is Canada's national art museum. The museum's building takes up 46,621 square metres , with 12,400 square metres of space used for exhibiting art; making the museum one of the largest art museums in North America by exhibition space. The institution was established in 1880 at the Second Supreme Court of Canada building, and moved to the Victoria Memorial Museum building in 1911. In 1913, the Government of Canada passed the National Gallery Act, formally outlined the institution's mandate as a national art museum. The museum was moved to the Lorne building in 1960. In 1988, the museum was relocated to its present location. The National Gallery of Canada is presently situated in a glass and granite building on Sussex Drive with a notable view of the Canadian Parliament buildings on Parliament Hill. The building was designed by Moshe Safdie and opened in 1988.The museum's permanent collection includes over 93,000 works from European, American, and Asian, Canadian, and indigenous Canadian artists. In addition to exhibiting works from its permanent collection, the museum also organizes and hosts a number of travelling exhibitions.

The McCord Museum is a public research and teaching museum dedicated to the preservation, study, diffusion, and appreciation of Canadian history. The museum, whose full name is McCord Museum of Canadian History, is located next to McGill University, in downtown Montreal, Quebec, Canada.

The Musée national des beaux-arts du Québec , often abbreviated as MNBAQ, is an art museum in Quebec City, Quebec, Canada. The museum is situated in Battlefield Park, and is a complex made up of four buildings. Three of the buildings in the complex were purpose-built for the museum, while the other was initially built as a provincial prison, before being re-purposed for museum use. The institution was opened as the Musée de la province de Québec in 1933. The museum initially served as the provincial archives, art, and natural science museum until 1962, when the natural science collection was removed. In the following year, the museum was renamed the Musée du Quebec. The provincial archives were moved from the museum in 1979, leaving it solely as an art museum. In 2002, the museum was renamed the Musée national des beaux-arts du Québec. Its collection includes over 40,000 works spanning from the 16th century, to the present day. Its collection primarily includes works that were produced in Quebec, or by Quebec artist, although it does also includes works from other parts of Canada, and the rest of the world. The museum is affiliated with the Canadian Museums Association, the Canadian Heritage Information Network, and the Virtual Museum of Canada.

The Montreal Museum of Fine Arts is an art museum in Montreal, Quebec, Canada. It is the largest art museum in Canada by gallery space. The museum is located on the historic Golden Square Mile stretch of Sherbrooke Street. The MMFA is spread across five pavilions, and occupies a total floor area of 53,095 square metres , 13,000 of which are exhibition space. With the 2016 inauguration of the Michal and Renata Hornstein Pavilion for Peace, the museum campus was expected to become the eighteenth largest art museum in North America. The permanent collection included approximately 44,000 works in 2013. The original "reading room" of the Art Association of Montreal was the precursor of the museum's current library, the oldest art library in Canada.The Montreal Museum of Fine Arts is a member of the International Group of Organizers of Large-scale Exhibitions, also known as the Bizot Group, a forum which allows the leaders of the largest museums in the world to exchange works and exhibitions. Founded in 1860, it is the oldest museum in Canada.

The Art Gallery of Hamilton is an art museum located in Hamilton, Ontario, Canada. The museum occupies a 7,000 square metres building on King Street West in downtown Hamilton, designed by Trevor P. Garwood-Jones. The museum relocated to the building in 1977, with renovations by Bruce Kuwabara later undertaken in 2005. The museum was established as the Municipal Gallery of Hamilton in January 1914, and was opened to the public in June 1914, at a Hamilton Public Library building on Main Street West. The museum continued to operate from that location until 1953, when the museum relocated to a new building in the neighbourhood of Westdale. In 1977, the museum moved to its present King Street West location. The museum building was renovated with designs by Bruce Kuwabara from 2003 to 2005. The Art Gallery of Hamilton's permanent collection has over 10,000 works by artists from Canada, and around the world. In addition to exhibiting works from its collection, the museum has also organized, and hosted a number of travelling exhibitions.

Library and Archives Canada is a federal institution tasked with acquiring, preserving and making Canada's documentary heritage accessible. It is the fourth-largest library in the world. LAC reports to Parliament through Steven Guilbeault, the Minister of Canadian Heritage since November 20, 2019.