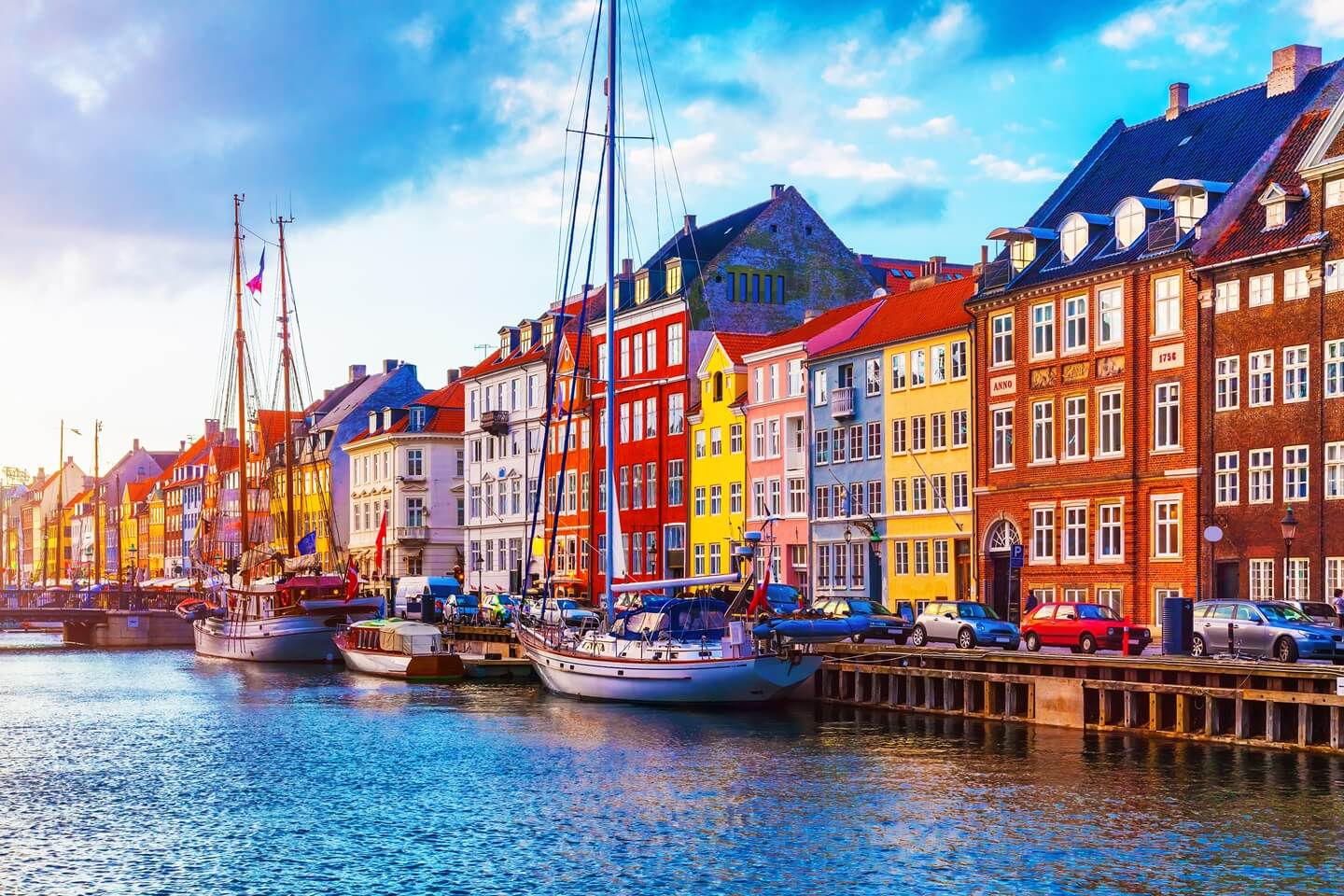 Denmark ), officially the Kingdom of Denmark, is a Nordic country in Northern Europe. Denmark proper, which is the southernmost of the Scandinavian countries, consists of a peninsula, Jutland, and an archipelago of 443 named islands, with the largest being Zealand, Funen and the North Jutlandic Island. The islands are characterised by flat, arable land and sandy coasts, low elevation and a temperate climate. Denmark lies southwest of Sweden and south of Norway, and is bordered to the south by Germany. The Kingdom of Denmark is constitutionally a unitary state comprising Denmark proper and the two autonomous territories in the North Atlantic Ocean: the Faroe Islands and Greenland. Denmark has a total area of 42,924 km2 , land area of 42,394 km2 , and the total area of the Kingdom including Greenland and the Faroe Islands is 2,210,579 km2 , and a population of 5.82 million in Denmark proper .The unified kingdom of Denmark emerged in the 8th century as a proficient seafaring nation in the struggle for control of the Baltic Sea. Denmark, Sweden, and Norway were ruled together under one sovereign ruler in the Kalmar Union, established in 1397 and ending with Swedish secession in 1523. The areas of Denmark and Norway remained under the same monarch until 1814, Denmark–Norway. Beginning in the 17th century, there were several devastating wars with the Swedish Empire, ending with large cessions of territory to Sweden. After the Napoleonic Wars, Norway was ceded to Sweden, while Denmark kept the Faroe Islands, Greenland, and Iceland. In the 19th century there was a surge of nationalist movements, which were defeated in the First Schleswig War. After the Second Schleswig War in 1864, Denmark lost the Duchy of Schleswig to Prussia. Denmark remained neutral during World War I, however, in 1920 the northern half of Schleswig became Danish again. In April 1940, a German invasion saw brief military skirmishes while the Danish resistance movement was active from 1943 until the German surrender in May 1945. An industrialised exporter of agricultural produce in the second half of the 19th century, Denmark introduced social and labour-market reforms in the early 20th century that created the basis for the present welfare state model with a highly developed mixed economy. The Constitution of Denmark was signed on 5 June 1849, ending the absolute monarchy, which had begun in 1660. It establishes a constitutional monarchy organised as a parliamentary democracy. The government and national parliament are seated in Copenhagen, the nation's capital, largest city, and main commercial centre. Denmark exercises hegemonic influence in the Danish Realm, devolving powers to handle internal affairs. Home rule was established in the Faroe Islands in 1948; in Greenland home rule was established in 1979 and further autonomy in 2009. Denmark became a member of the European Economic Community in 1973, but negotiated certain opt-outs; it retains its own currency, the krone. It is among the founding members of NATO, the Nordic Council, the OECD, OSCE, and the United Nations; it is also part of the Schengen Area. Denmark has close ties to its Scandinavian neighbours also linguistically, with the Danish language being partially mutually intelligible with both Norwegian and Swedish. Denmark is considered to be one of the most economically and socially developed countries in the world. Danes enjoy a high standard of living and the country ranks highly in some metrics of national performance, including education, health care, protection of civil liberties, democratic governance, LGBT equality, prosperity, and human development. The country ranks as having the world's highest social mobility, a high level of income equality, the lowest perceived level of corruption in the world, the eleventh-highest HDI in the world, one of the world's highest per capita incomes, and one of the world's highest personal income tax rates.

The National Gallery of Denmark is the Danish national gallery, located in the centre of Copenhagen.The museum collects, registers, maintains, researches and handles Danish and foreign art dating from the 14th century to the present day.

The Ny Carlsberg Glyptotek , commonly known simply as Glyptoteket, is an art museum in Copenhagen, Denmark. The collection is built around the personal collection of Carl Jacobsen , the son of the founder of the Carlsberg Breweries. Primarily a sculpture museum, as indicated by the name, the focal point of the museum is antique sculpture from the ancient cultures around the Mediterranean, including Egypt, Rome and Greece, as well as more modern sculptures such as a collection of Auguste Rodin's works, considered to be the most important outside France. However, the museum is equally noted for its collection of paintings that includes an extensive collection of French impressionists and Post-impressionists as well as Danish Golden Age paintings. The French Collection includes works by painters such as Jacques-Louis David, Monet, Pissarro, Renoir, Degas and Cézanne, as well as those by Post-impressionists such as van Gogh, Toulouse-Lautrec and Bonnard. The museum's collection includes all the bronze sculptures of Degas, including the series of dancers. Numerous works by Norwegian-Danish sculptor Stephan Sinding are featured prominently in various sections of the museum.

The Hirschsprung Collection is an art museum located on Stockholmsgade in Copenhagen, Denmark. It is located in a parkland setting in Østre Anlæg, near the Danish National Gallery, and houses a large collection of Danish art from the 19th and early 20th century. The emphasis is on the Danish Golden Age, from 1800 to 1850, but also the Skagen Painters and other representatives of the Modern Breakthrough are well represented. The museum is built around the personal art collection of Heinrich Hirschsprung, a tobacco manufacturer and patron of the arts who founded his art collection in 1865. Almost four decades later, in 1902, he donated it to the Danish state. It is displayed in a purpose-built Neoclassical museum building designed by Hermann Baagøe Storck and completed in 1911.

Ordrupgaard is a state-owned art museum situated near Jægersborg Dyrehave, north of Copenhagen, Denmark. The museum houses one of Northern Europe’s most considerable collections of Danish and French art from the 19th and beginning of the 20th century.

Skagens Museum is an art museum in Skagen, Denmark, that exhibits an extensive collection of works by members of the colony of Skagen Painters who lived and worked in the area in the late 19th and early 20th centuries. Important artists include Marie and P. S. Krøyer, Anna and Michael Ancher, Laurits Tuxen, Viggo Johansen, and Holger Drachmann. The museum also hosts special exhibitions. Its facilities include a café in the Garden House, an old building which for a while served as home residence and studio of Anna and Michael Ancher.

The Thorvaldsen Museum is a single-artist museum in Copenhagen, Denmark, dedicated to the art of Danish neoclassicistic sculptor Bertel Thorvaldsen , who lived and worked in Rome for most of his life . The museum is located on the small island of Slotsholmen in central Copenhagen next to Christiansborg Palace. Designed by Michael Gottlieb Bindesbøll, the building was constructed from 1838–48 following a public collection of funds in 1837.

The ARoS Aarhus Kunstmuseum is an art museum in Aarhus, Denmark. The museum was established in 1859 and is the oldest public art museum in Denmark outside Copenhagen. On 7 April 2004, ARoS Aarhus Kunstmuseum opened with exhibitions in a brand new modern building, 10 storeys tall with a total floor area of 20,700 m² and designed by Danish architects Schmidt Hammer Lassen. Today, ARoS is one of the largest art museums in Northern Europe with a total of 980,909 visitors in 2017. Apart from the large galleries with both permanent and changing exhibitions, the ARoS building features an arts shop, a dining café and a restaurant. The architectural vision of the museum was completed in 2011, with the addition of the circular skywalk Your rainbow panorama by Ólafur Elíasson. The installation has helped boost the museum's attendance, making it the second most visited museum in Denmark, just behind the well-known Louisiana Museum in Humlebæk.

Frederiksborg Castle is a palatial complex in Hillerød, Denmark. It was built as a royal residence for King Christian IV of Denmark-Norway in the early 17th century, replacing an older castle acquired by Frederick II and becoming the largest Renaissance residence in Scandinavia. Situated on three islets in the Slotssøen , it is adjoined by a large formal garden in the Baroque style. After a serious fire in 1859, the castle was rebuilt on the basis of old plans and paintings. Thanks to public support and the brewer J. C. Jacobsen, its apartments were fully restored and reopened to the public as the Danish Museum of National History in 1882. Open throughout the year, the museum contains the largest collection of portrait paintings in Denmark. It also provides visitors with an opportunity to visit several of the castle's state rooms including the restored Valdemar Room and Great Hall as well as the Chapel and the Audience Chamber which were both largely spared by the fire and contain sumptuous decorations.

Randers Museum of Art is a Danish art museum in Randers in northeastern Jutland, Denmark. The museum is located in the cultural centre of Kulturhuset in the town centre and displays many of the major works of Danish painters, especially those of the 19th and 20th centuries.