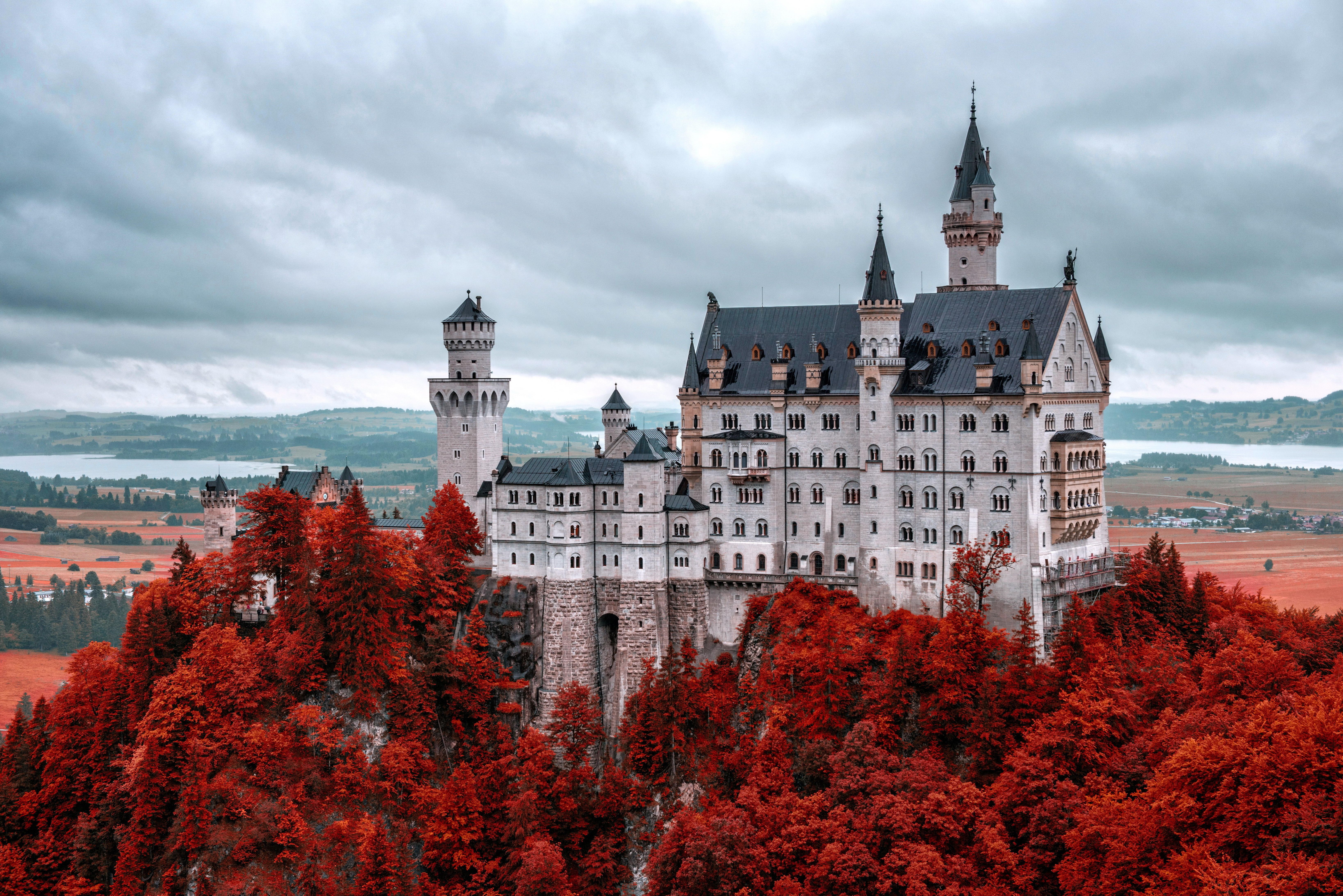 Germany , officially the Federal Republic of Germany , is a country in Central and Western Europe. Covering an area of 357,022 square kilometres , it lies between the Baltic and North seas to the north, and the Alps to the south. It borders Denmark to the north, Poland and the Czech Republic to the east, Austria and Switzerland to the south, and France, Luxembourg, Belgium and the Netherlands to the west. Various Germanic tribes have inhabited the northern parts of modern Germany since classical antiquity. A region named Germania was documented before AD 100. Beginning in the 10th century, German territories formed a central part of the Holy Roman Empire. During the 16th century, northern German regions became the centre of the Protestant Reformation. Following the Napoleonic Wars and the dissolution of the Holy Roman Empire in 1806, the German Confederation was formed in 1815. In 1871, Germany became a nation state when most of the German states unified into the Prussian-dominated German Empire. After World War I and the German Revolution of 1918–1919, the Empire was replaced by the semi-presidential Weimar Republic. The Nazi seizure of power in 1933 led to the establishment of a dictatorship, World War II, and the Holocaust. After the end of World War II in Europe and a period of Allied occupation, two new German states were founded: the Federal Republic of Germany, generally known as West Germany, and the German Democratic Republic, East Germany. The Federal Republic of Germany was a founding member of the European Economic Community and the European Union, while the German Democratic Republic was a communist Eastern Bloc state and member of the Warsaw Pact. After the fall of communism, German reunification saw the former East German states join the Federal Republic of Germany on 3 October 1990. Today, Germany is a federal parliamentary republic led by a chancellor. With over 83 million inhabitants of its 16 constituent states, it is the second-most populous country in Europe after Russia, as well as the most populous member state of the European Union. Its capital and largest city is Berlin, and its financial centre is Frankfurt; the largest urban area is the Ruhr. Germany is a great power with a strong economy; it has the largest economy in Europe, the world's fourth-largest economy by nominal GDP, and the fifth-largest by PPP. As a global leader in several industrial and technological sectors, it is both the world's third-largest exporter and importer of goods. A highly developed country with a very high standard of living, it offers social security and a universal health care system, environmental protections, and a tuition-free university education. Germany is also a member of the United Nations, NATO, the G7, the G20, and the OECD. Known for its long and rich cultural history, Germany has many World Heritage sites and is among the top tourism destinations in the world.

The Alte Pinakothek is an art museum located in the Kunstareal area in Munich, Germany. It is one of the oldest galleries in the world and houses a significant collection of Old Master paintings. The name Alte Pinakothek refers to the time period covered by the collection—from the fourteenth to the eighteenth century. The Neue Pinakothek, re-built in 1981, covers nineteenth-century art, and Pinakothek der Moderne, opened in 2002, exhibits modern art. All three galleries are part of the Bavarian State Painting Collections, an organization of the Free state of Bavaria.

The Wallraf–Richartz Museum is one of the three major museums in Cologne, Germany. It houses an art gallery with a collection of fine art from the medieval period to the early twentieth century.

The Neue Pinakothek is an art museum in Munich, Germany. Its focus is European Art of the 18th and 19th centuries, and it is one of the most important museums of art of the nineteenth century in the world. Together with the Alte Pinakothek and the Pinakothek der Moderne, it is part of Munich's "Kunstareal" .

The Hamburger Kunsthalle is the art museum of the Free and Hanseatic City of Hamburg, Germany. It is one of the largest museums in the country. The name 'Kunsthalle' indicates the museum's history as an 'art hall' when founded in 1850. Today, the Kunsthalle houses one of the few art collections in Germany that covers seven centuries of European art, from the Middle Ages to the present day. The Kunsthalle's permanent collections focus on North German painting of the 14th century, and paintings by Dutch, Flemish and Italian artists of the 16th and 17th centuries, French and German drawings and paintings of the 19th century, and international modern and contemporary art. The Kunsthalle consists of three connected buildings, dating from 1869, 1921 and 1997, located in the Altstadt district, between the Hauptbahnhof and the two Alster lakes.

The Städel Museum, officially the Städelsches Kunstinstitut und Städtische Galerie, is an art museum in Frankfurt, with one of the most important collections in Germany. The Städel Museum owns 3,100 paintings, 660 sculptures, more than 4,600 photographs and more than 100,000 drawings and prints. It has around 4,000 m² of display and a library of 115,000 books. The Städel was honoured as "Museum of the Year 2012" by the German art critics association AICA in 2012. In the same year the museum recorded the highest attendance figures in its history, of 447,395 visitors.

The Lindenau-Museum is an art museum in Altenburg, Thuringia, Germany. It originated as the house-museum of baron and collector Bernhard August von Lindenau. The building was completed in 1876. The museum's main attraction is its collection of Italian paintings from the late Gothic and early Renaissance age , which are among the largest outside Italy. The artworks include Filippo Lippi's St. Jerome in Penance, Sandro Botticelli's Portrait of Caterina Sforza and a predella panel by Fra Angelico. It also keeps ancient antiquities and modern works, and has a library. The museum is a member of the Konferenz Nationaler Kultureinrichtungen, a union of more than twenty cultural institutions in the former East Germany.