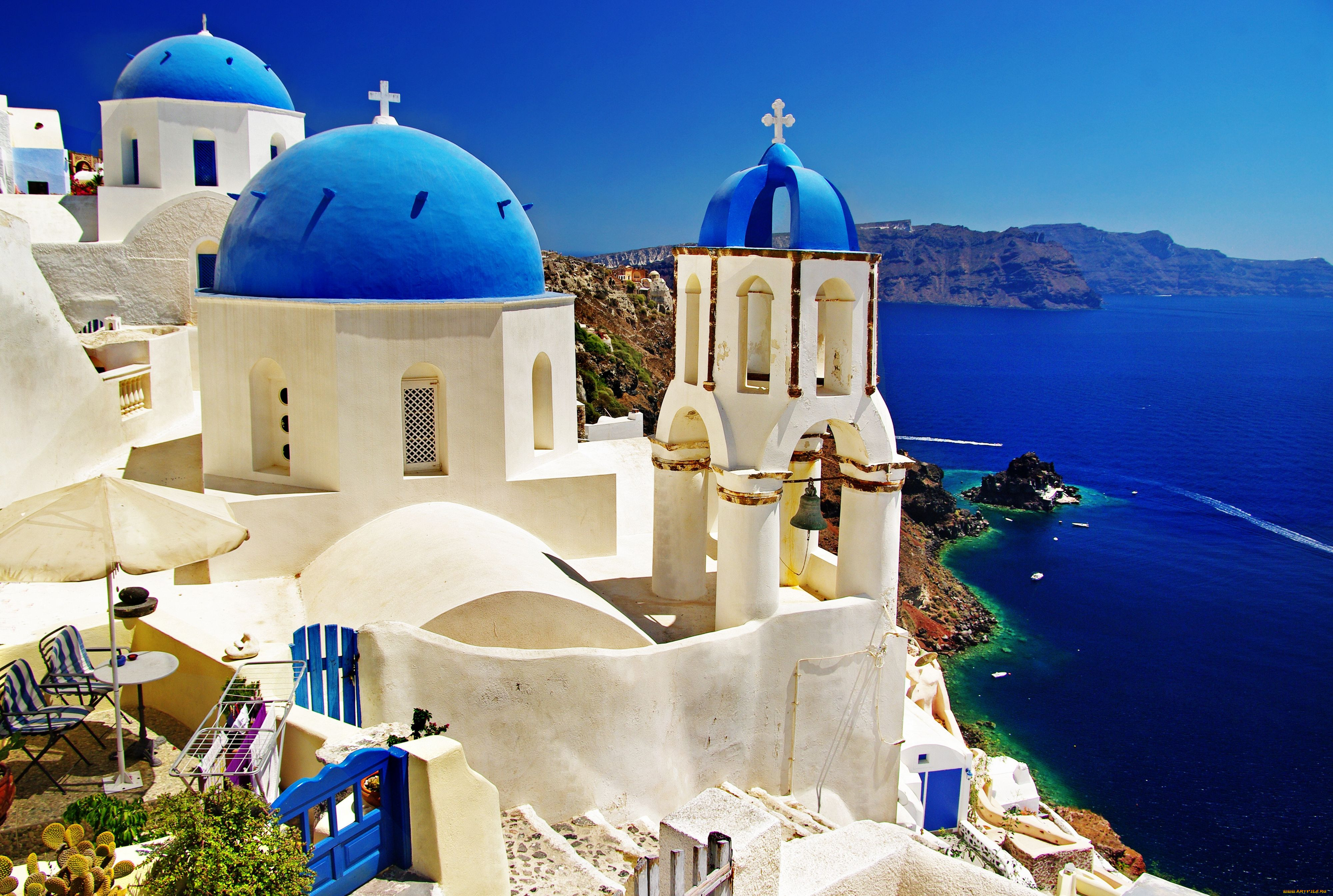 Greece , officially the Hellenic Republic, known also as Hellas, is a country located in Southeast Europe. Its population is approximately 10.7 million as of 2018; Athens, the nation's capital, is its largest city, followed by Thessaloniki. Situated on the southern tip of the Balkans, Greece is located at the crossroads of Europe, Asia, and Africa. It shares land borders with Albania to the northwest, North Macedonia and Bulgaria to the north, and Turkey to the northeast. The Aegean Sea lies to the east of the mainland, the Ionian Sea to the west, the Cretan Sea and the Mediterranean Sea to the south. Greece has the longest coastline on the Mediterranean Basin and the 11th longest coastline in the world at 13,676 km in length, featuring many islands, of which 227 are inhabited. Eighty percent of Greece is mountainous, with Mount Olympus being the highest peak at 2,918 metres . The country consists of nine traditional geographic regions: Macedonia, Central Greece, the Peloponnese, Thessaly, Epirus, the Aegean Islands , Thrace, Crete, and the Ionian Islands. Greece is considered the cradle of Western civilization, being the birthplace of democracy, Western philosophy, Western literature, historiography, political science, major scientific and mathematical principles, Western drama and the Olympic Games. From the eighth century B.C., the Greeks were organised into various independent city-states, known as poleis , which spanned the Mediterranean and the Black Sea. Philip II of Macedon united most of present-day Greece in the fourth century B.C., with his son Alexander the Great rapidly conquering much of the ancient world, from the eastern Mediterranean to India. The subsequent Hellenistic period saw the height of Greek culture and influence in antiquity. Greece was annexed by Rome in the second century B.C., becoming an integral part of the Roman Empire and its successor, the Byzantine Empire, which adopted the Greek language and culture. The Greek Orthodox Church, which emerged in the first century A.D., helped shape modern Greek identity and transmitted Greek traditions to the wider Orthodox world. After falling under Ottoman dominion in the mid-15th century, Greece emerged as a modern nation state in 1830 following a war of independence. The country's rich historical legacy is reflected in part by its 18 UNESCO World Heritage Sites. Greece is a unitary parliamentary republic and developed country with an advanced high-income economy, a high quality of life, and a very high standard of living. Its economy is the largest in the Balkans, where it is an important regional investor. A founding member of the United Nations, Greece was the tenth member to join the European Communities and has been part of the Eurozone since 2001. It is also a member of numerous other international institutions, including the Council of Europe, the North Atlantic Treaty Organization , the Organisation for Economic Co-operation and Development , the World Trade Organization , the Organization for Security and Co-operation in Europe , and the Organisation internationale de la Francophonie . Greece's unique cultural heritage, large tourism industry, prominent shipping sector and geostrategic importance classify it as a middle power.

The National Art Gallery–Alexandros Soutzos Museum is an art museum located in the Pangrati district, Athens, Greece. It is devoted to Greek and European art from the 14th century to the 20th century. It is directed by Marina Lambraki-Plaka. Closed and renovating now. 06.04.2019.

The Byzantine and Christian Museum is situated at Vassilissis Sofias Avenue in Athens, Greece. It was founded in 1914, and houses more than 25,000 exhibits with rare collections of pictures, scriptures, frescoes, pottery, fabrics, manuscripts, and copies of artifacts from the 3rd century AD to the Late Middle Ages. It is one of the most important museums in the world in Byzantine Art. In June 2004, in time for its 90th anniversary and the 2004 Athens Olympics, the museum reopened to the public after an extensive renovation and the addition of another wing.

The Benaki Museum, established and endowed in 1930 by Antonis Benakis in memory of his father Emmanuel Benakis, is housed in the Benakis family mansion in downtown Athens, Greece. The museum houses Greek works of art from the prehistorical to the modern times, an extensive collection of Asian art, hosts periodic exhibitions and maintains a state-of-the-art restoration and conservation workshop. Although the museum initially housed a collection that included Islamic art, Chinese porcelain and exhibits on toys, its 2000 re-opening led to the creation of satellite museums that focused on specific collections, allowing the main museum to focus on Greek culture over the span of the country's history.

The Historical Museum of Crete was founded by the Society of Cretan Historical Studies in 1953 and is housed in a neoclassical building of significant architectural merit in the city of Heraklion on Crete, an island of Greece. The museum was expanded following the addition of a new wing and floor.The museum's permanent collections highlight the art and history of Crete from the 4th century AD up to and including the Second World War. The collections are ordered chronologically and by subject matter, and are combined with visual material and multimedia. They include ceramics, sculptures, coins, jewellery, wall paintings, portable icons, ritual objects, manuscripts, heirlooms, weavings, the reconstructed interior of a Cretan rural home and much more. The museum's finest exhibits are two paintings by Doménikos Theotokópoulos , born in Crete: The Baptism of Christ and View of Mount Sinai , the only works by the artist now on Crete. Another outstanding exhibit is a 4×4 metre mock-up of mid-17th century Chandax , at the time when the city reached its peak under Venetian rule. Of particular interest is the Nikos Kazantzakis Collection, featuring the study and library from the author's home in Antibes, France, personal effects, manuscripts of his works, first editions of books in various languages, etc. The temporary exhibition rooms at the Historical Museum of Crete host exhibitions on a wide range of themes .The museum library, featuring rare editions and much archive and photographic material, caters for the needs of both researchers and the general public.

Dormition of the Virgin (El Greco)

El Greco painted his Dormition of the Virgin near the end of his Cretan period, probably before 1567. El Greco's signature on the base of the central candelabrum was discovered in 1983. The discovery of the Dormition led to the attribution of three other signed works of "Doménicos" to El Greco and then to the acceptance as authentic of more works, signed or not , painted in 1566).This discovery constituted a significant advance in the understanding of El Greco's formation and early career. The painting combines post-Byzantine and Italian mannerist stylistic and iconographic elements. El Greco is now seen as an artist with a formative training on Crete; a series of works illuminate the style of early El Greco, some painted while he was still in Crete, some from his period in Venice, and some from his subsequent stay in Rome.The icon, which retains its function as an object of veneration in the Church of the Dormition of the Virgin in Syros, was probably brought to the island during the Greek War of Independence. The icon conforms closely to the established pattern for this subject, which was very common in the Orthodox Church in which El Greco was raised and was influenced by. Nevertheless, it has lost some elements of the traditional Byzantine austerity, adopting traits of the Renaissance engravings.The composition of the Burial of the Count of Orgaz has been closely related to the Byzantine iconography of the Dormition of the Theotokos. The examples that have been used to support this point of view have a close relationship with the icon of the Dormition by El Greco that was discovered in 1983 in the church of the same name in Syros. Marina Lambraki-Plaka believes that such a connection exists. Robert Byron, according to whom the iconographic type of the Dormition was the compositional model for The Burial of the Count of Orgaz, asserts that El Greco as a genuine Byzantine painter worked throughout his life with a repertoire of components and motifs at will, depending on the narrative and expressive requirements of the art.

Monastery of Saint John the Theologian

The Monastery of Saint John the Theologian is a Greek Orthodox monastery founded in 1088 in Chora on the island of Patmos. UNESCO has declared it a World Heritage site. It is named after St. John of Patmos.

A pinacotheca board, tablet' + θήκη, thíki, 'box, chest') was a picture gallery in either ancient Greece or ancient Rome. The name is specifically used for the building containing pictures which formed the left wing of the Propylaea on the Acropolis at Athens, Greece. The Pinacotheca was located next to the temple of Athena Nike. Though Pausanias speaks of the pictures "which time had not effaced", which seems to point to fresco painting, the fact that there is no trace of preparation for stucco on the walls shows that the paintings were easel pictures. The Romans adopted the term for the room in a private house containing pictures, statues, and other works of art. In the modern world the word is often used as a name for a public art gallery concentrating on paintings, mostly in Italy , such as the Pinacoteca Vaticana of the Vatican Museums , the Pinacoteca di Brera in Milan , the Pinacoteca Giovanni e Marella Agnelli built on the roof of the former Lingotto Fiat factory in Turin, Italy, with others in Bologna and Siena. In Brazil, there is the Pinacoteca do Estado de São Paulo. In Paris, the Pinacothèque de Paris. In Munich the three main galleries are called the Alte Pinakothek , Neue Pinakothek and Pinakothek der Moderne. The Pinacotheca, Melbourne, was a gallery for avant-garde art from 1967 to 2002. At Hallbergmoos, near Munich Airport, there was the Pinakothek Hallbergmoos between 2010 and 2014.