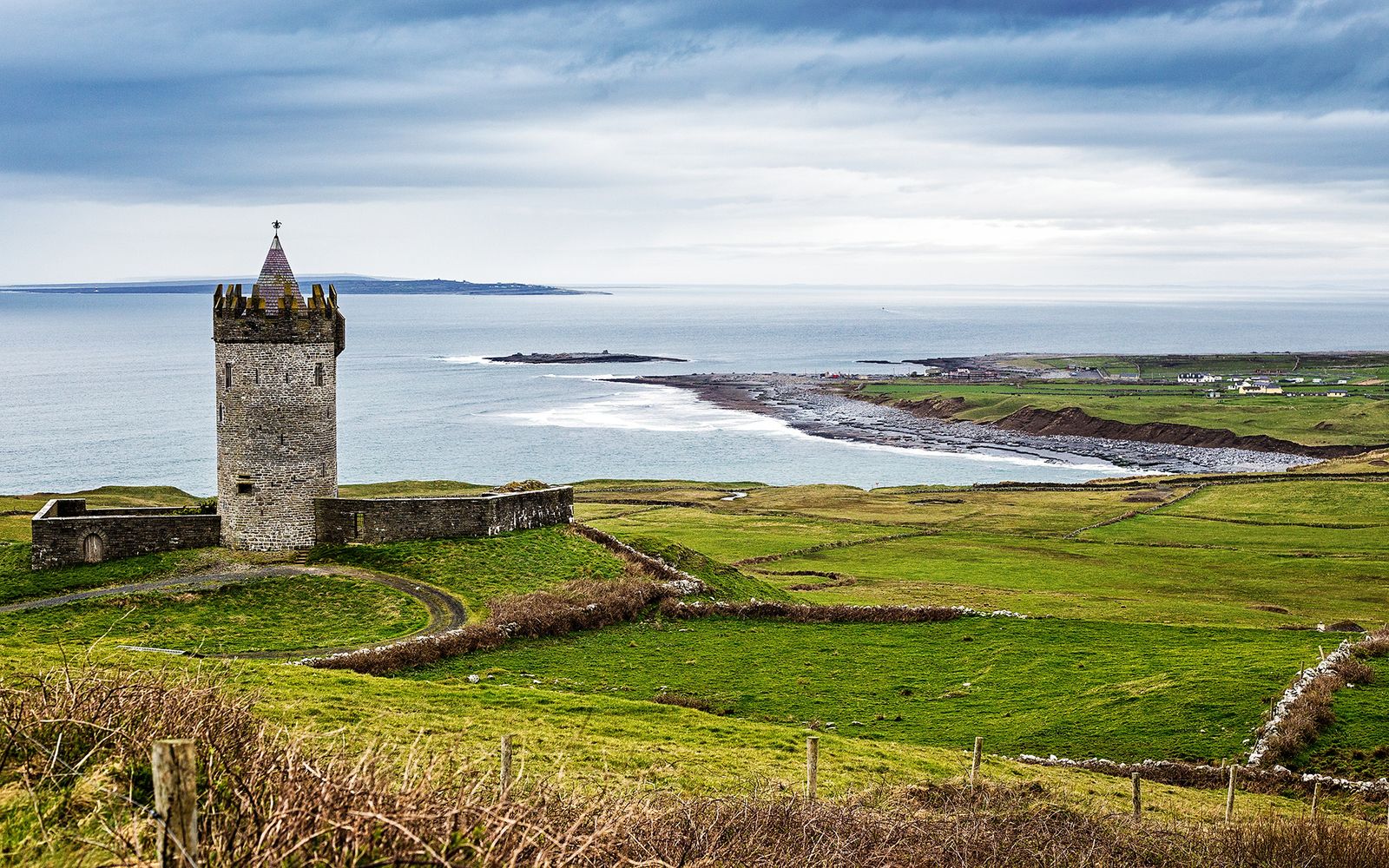 Ireland ; Irish: Éire [ˈeːɾʲə] ; Ulster-Scots: Airlann [ˈɑːrlən]) is an island in the North Atlantic. It is separated from Great Britain to its east by the North Channel, the Irish Sea, and St George's Channel. Ireland is the second-largest island of the British Isles, the third-largest in Europe, and the twentieth-largest on Earth.Geopolitically, Ireland is divided between the Republic of Ireland , which covers five-sixths of the island, and Northern Ireland, which is part of the United Kingdom. In 2011, the population of Ireland was about 6.6 million, ranking it the second-most populous island in Europe after Great Britain. As of 2016, 4.8 million live in the Republic of Ireland, and 1.8 million live in Northern Ireland.The geography of Ireland comprises relatively low-lying mountains surrounding a central plain, with several navigable rivers extending inland. Its lush vegetation is a product of its mild but changeable climate which is free of extremes in temperature. Much of Ireland was woodland until the end of the Middle Ages. Today, woodland makes up about 10% of the island, compared with a European average of over 33%, and most of it is non-native conifer plantations. There are twenty-six extant land mammal species native to Ireland. The Irish climate is influenced by the Atlantic Ocean and thus very moderate, and winters are milder than expected for such a northerly area, although summers are cooler than those in continental Europe. Rainfall and cloud cover are abundant. The earliest evidence of human presence in Ireland is dated at 10,500 BC. Gaelic Ireland had emerged by the 1st century AD. The island was Christianised from the 5th century onward. Following the 12th century Norman invasion, England claimed sovereignty. However, English rule did not extend over the whole island until the 16th–17th century Tudor conquest, which led to colonisation by settlers from Britain. In the 1690s, a system of Protestant English rule was designed to materially disadvantage the Catholic majority and Protestant dissenters, and was extended during the 18th century. With the Acts of Union in 1801, Ireland became a part of the United Kingdom. A war of independence in the early 20th century was followed by the partition of the island, creating the Irish Free State, which became increasingly sovereign over the following decades, and Northern Ireland, which remained a part of the United Kingdom. Northern Ireland saw much civil unrest from the late 1960s until the 1990s. This subsided following a political agreement in 1998. In 1973 the Republic of Ireland joined the European Economic Community while the United Kingdom, and Northern Ireland, as part of it, did the same. Irish culture has had a significant influence on other cultures, especially in the field of literature. Alongside mainstream Western culture, a strong indigenous culture exists, as expressed through Gaelic games, Irish music and the Irish language. The island's culture shares many features with that of Great Britain, including the English language, and sports such as association football, rugby, horse racing, and golf.

Trinity College , officially the College of the Holy and Undivided Trinity of Queen Elizabeth near Dublin, is the sole constituent college of the University of Dublin, a research university located in Dublin, Ireland. The college was founded in 1592 by Queen Elizabeth I as "the mother of a university" that was modeled after the collegiate universities of Oxford and Cambridge, but unlike these affiliated institutions, only one college was ever established; as such, the designations "Trinity College" and "University of Dublin" are usually synonymous for practical purposes. The college is legally incorporated by "the Provost, Fellows, Foundation Scholars and other members of the Board," as outlined by its founding charter. It is one of the seven ancient universities of Britain and Ireland, as well as Ireland's oldest surviving university. Trinity College is widely considered the most prestigious university in Ireland, and one of the most elite academic institutions in Europe. The college is particularly acclaimed in the fields of Law, Literature and Humanities. In accordance with the formula of ad eundem gradum, a form of recognition that exists among the University of Oxford, the University of Cambridge and the University of Dublin, a graduate of Oxford, Cambridge, or Dublin can be conferred with the equivalent degree at either of the other two universities without further examination. Trinity College, Dublin is a sister college to St John's College, Cambridge and Oriel College, Oxford.Originally, Trinity was established outside the city walls of Dublin in the buildings of the outlawed Catholic Augustinian Priory of All Hallows. Trinity College was set up in part to consolidate the rule of the Tudor monarchy in Ireland, and as a result was the university of the Protestant Ascendancy for much of its history. While Catholics were admitted from 1793, certain restrictions on membership of the college remained, as professorships, fellowships and scholarships were reserved for Protestants. These restrictions were lifted by an Act of Parliament in 1873. However, from 1871 to 1970, the Catholic Church in Ireland, in turn, forbade its adherents from attending Trinity College without permission. Women were first admitted to the college as full members in January 1904.The university is a member of the League of European Research Universities , a list of 23 institutions that excel in academic research, and is the only Irish university in the group. Trinity College was ranked 43rd in the world by QS World University Rankings in 2009 and is currently ranked 101st. The university has educated some of Ireland's most famous poets, playwrights and authors, including Oscar Wilde, Jonathan Swift, Bram Stoker, William Trevor, Oliver Goldsmith and William Congreve, Nobel Laureates Samuel Beckett, Ernest Walton and William Cecil Campbell, former Presidents of Ireland Mary McAleese, Douglas Hyde and Mary Robinson, philosophers including George Berkeley and Edmund Burke, politician David Norris and mathematician William Rowan Hamilton. Given its long history, the university also finds mention in many novels, fables and urban legends.Trinity College is now surrounded by central Dublin and is located on College Green, opposite the historic Irish Houses of Parliament. The college campus is often ranked among the most beautiful university campuses in the world, primarily due to its iconic Georgian architecture buildings. The college proper occupies 190,000 m2 , with many of its buildings ranged around large quadrangles and two playing fields. Academically, it is divided into three faculties comprising 25 schools, offering degree and diploma courses at both undergraduate and postgraduate levels. The university is globally recognised as a leading international centre for research and also as a world leader in Nanotechnology, Information Technology, Immunology, Mathematics, Engineering, Psychology, Politics, English and Humanities. The admission procedure is highly competitive, and based exclusively on academic merit. The Library of Trinity College is a legal deposit library for Ireland and Great Britain, containing around 7 million printed volumes and significant quantities of manuscripts, including the renowned Book of Kells, which arrived at the college in 1661 for safekeeping after the Cromwellian raids on religious institutions. The enormous collection housed in the Long Room includes a rare copy of the 1916 Proclamation of the Irish Republic and an iconic 15th-century wooden harp which is the model for the current emblem of Ireland. The library itself receives over half a million visitors each year, making it the most important one in Ireland.

The National Gallery of Ireland houses the national collection of Irish and European art. It is located in the centre of Dublin with one entrance on Merrion Square, beside Leinster House, and another on Clare Street. It was founded in 1854 and opened its doors ten years later. The Gallery has an extensive, representative collection of Irish paintings and is also notable for its Italian Baroque and Dutch masters painting. The current director is Sean Rainbird.

The Hugh Lane Gallery, officially Dublin City Gallery The Hugh Lane and originally the Municipal Gallery of Modern Art, is an art gallery operated by Dublin City Council and its subsidiary the Hugh Lane Gallery Trust. It is located in Charlemont House on Parnell Square, Dublin, Ireland. The gallery was founded by Sir Hugh Lane on Harcourt Street on 20 January 1908, and is the first known public gallery of modern art in the world. There is no admission fee and the gallery is completely wheelchair-accessible. The gallery was closed for reconstruction in 2004, and reopened in May 2006, with a new extension by Gilroy McMahon Architects.The museum has a permanent collection and hosts exhibitions, mostly by contemporary Irish artists. It has a dedicated Sean Scully room. Francis Bacon's studio was reconstructed in the gallery in 2001 after being dismantled and moved from London starting in 1998.The Hugh Lane is notable for its collection of French art, including works such as The Umbrellas by Auguste Renoir ; Portrait of Eva Gonzalès by Édouard Manet , Jour d’Été by Berthe Morisot and View of Louveciennes by Camille Pissarro.In 1992, the painting In The Omnibus by Honoré Daumier was stolen from the gallery, and recovered in 2014.

Larne Museum and Arts Centre is a local museum based in Larne, County Antrim, Northern Ireland. Built in 1905, this historic building opened its doors to the public in 1906 as the Carnegie Free Library, following financial assistance from the American millionaire and philanthropist Mr Andrew Carnegie. The library was built at a cost of £2500 and was officially opened on 2 April 1906 by Colonel J M McCalmont, M.P. The library eventually moved to larger premises on Pound Street in July 1980 at a cost of £205,000. Larne Historical Centre first opened in the Reading Room of the Carnegie Public Library in 1972 following a campaign by local people for a museum which led to a grant of £300 from Larne Borough Council. In 1976 the Centre moved to the ground floor of the McGarel Town Hall before returning to the old Carnegie Library building in June 1983. In 2005, to commemorate its centenary year, the building was restored and renovated, retaining many of its original features. The building is also now home to Larne Drama Circle and Larne Art Club. The Main Gallery hosts permanent displays reflecting the agricultural, industrial, military and maritime history of the area. Larne is a principal gateway into Northern Ireland and the strong maritime links of this east Antrim coastal community are portrayed through a variety of exhibits relating to the first roll-on, roll-off ferries, the Royal Navy and the MV Princess Victoria disaster. Larne’s rural hinterland, which includes two of the nine Glens of Antrim, is well represented in the museum’s folk life display. The War and Conflict section hosts objects from the Home Rule Crisis, Larne Gun Running and the First and Second World Wars. Visitors can access accounts and memories of local people through oral history listening posts and can browse through photographs in a digital community archive. The ‘John Clifford Gallery’ plays host to a variety of temporary exhibitions throughout the year. There are also a series of family events at the centre.The temporary exhibitions gallery has been named after John Clifford, the first curator of the museum. John was a local actor, poet and musician. He left Larne in 1937 to take up a civil service post in London where he became a professional actor. He returned to live in Larne in 1967 soon taking on the role of librarian in Carnegie Library. Due to his love of local history, John became a founding member and Chairman of Larne & District Folklore Society which formed in 1968. The society helped in the campaign for a local museum which led to John becoming the first curator of Larne Historical Centre. The museum is managed by Mid and East Antrim Borough Council, and forms part of the Mid-Antrim Heritage Partnership alongside similar local museums in Ballymena, Carrickfergus and Newtownabbey.