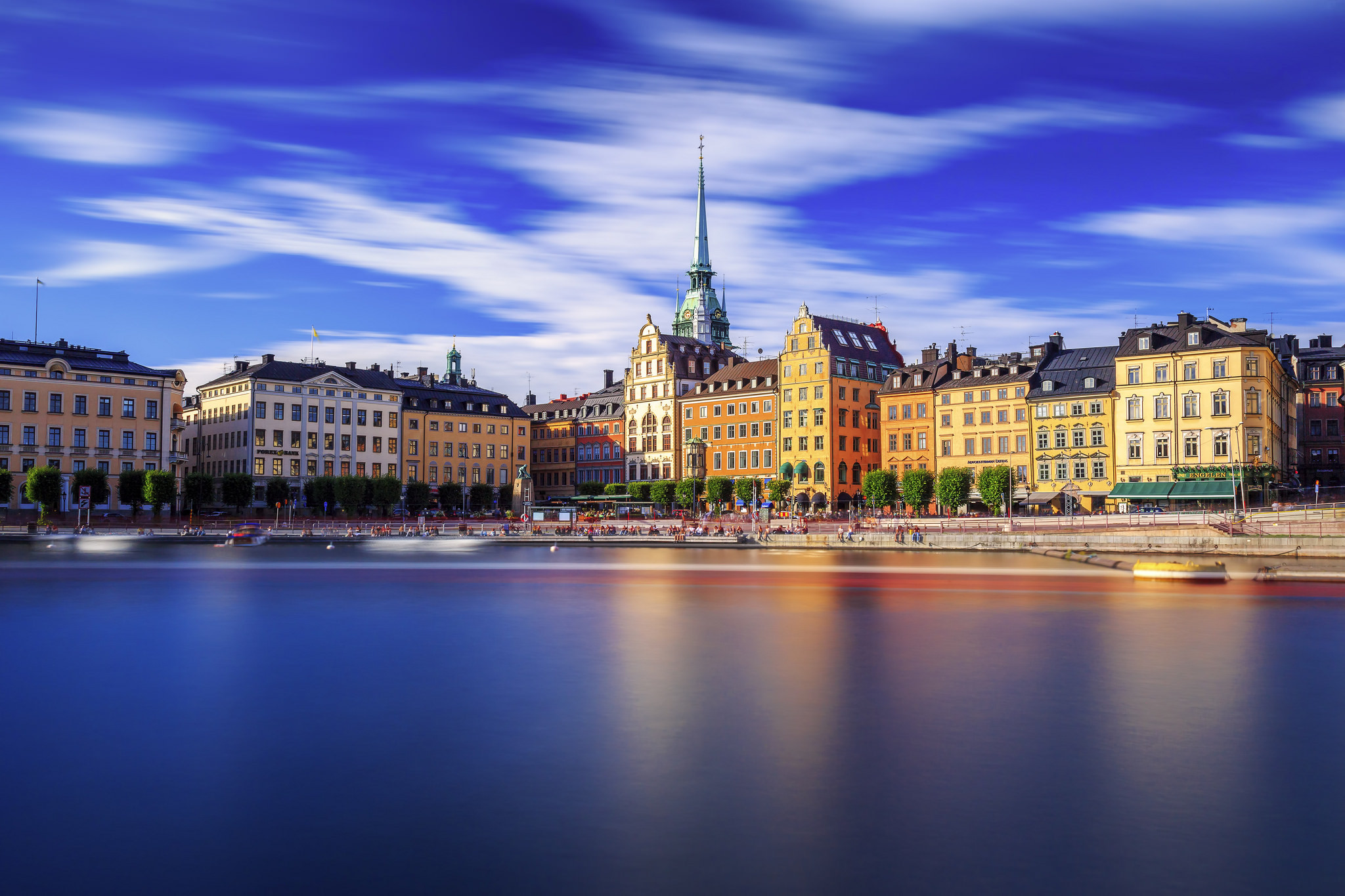 Sweden ), officially the Kingdom of Sweden ), is a Nordic country in Northern Europe. It borders Norway to the west and north, Finland to the east, and is connected to Denmark in the southwest by a bridge-tunnel across the Öresund Strait. At 450,295 square kilometres , Sweden is the largest country in Northern Europe, the third-largest country in the European Union and the fifth largest country in Europe by area. The capital city is Stockholm. Sweden has a total population of 10.3 million of which 2.6 million have a foreign background. Persons with foreign backgrounds are defined as persons who are foreign born, or born in Sweden with foreign born parents. It has a low population density of 25 inhabitants per square kilometre , with 1 437 persons per km² in localities. 87% of Swedes live in urban areas, which cover 1.5% of the entire land area. The highest concentration is in the central and southern half of the country. Sweden is part of the geographical area of Fennoscandia. The climate is in general mild for its northerly latitude due to significant maritime influence. In spite of the high latitude, Sweden often has warm continental summers, being located in between the North Atlantic, the Baltic Sea and the vast Eurasian Russian landmass. The general climate and environment vary significantly from the south and north due to the vast latitudal difference, and much of Sweden has reliably cold and snowy winters. Southern Sweden is predominantly agricultural, while the north is heavily forested and includes a portion of the Scandinavian Mountains. Germanic peoples have inhabited Sweden since prehistoric times, emerging into history as the Geats and Swedes and constituting the sea peoples known as the Norsemen. An independent Swedish state emerged during the early 12th century. After the Black Death in the middle of the 14th century killed about a third of the Scandinavian population, the Hanseatic League threatened Scandinavia's culture, finances and languages. This led to the forming of the Scandinavian Kalmar Union in 1397, which Sweden left in 1523. When Sweden became involved in the Thirty Years War on the Reformist side, an expansion of its territories began and eventually the Swedish Empire was formed. This became one of the great powers of Europe until the early 18th century. Swedish territories outside the Scandinavian Peninsula were gradually lost during the 18th and 19th centuries, ending with the annexation of present-day Finland by Russia in 1809. The last war in which Sweden was directly involved was in 1814, when Norway was militarily forced into a personal union, which peacefully dissolved in 1905. Since then, Sweden has been at peace, maintaining an official policy of neutrality in foreign affairs. In 2014, Sweden celebrated 200 years of peace, breaking even Switzerland's record for peace. Sweden was formally neutral through both world wars and the Cold War, albeit Sweden has since 2009 openly moved towards cooperation with NATO. Sweden is a constitutional monarchy and a parliamentary democracy, with legislative power vested in the 349-member unicameral Riksdag. It is a unitary state, currently divided into 21 counties and 290 municipalities. Sweden maintains a Nordic social welfare system that provides universal health care and tertiary education for its citizens. It has the world's eleventh-highest per capita income and ranks very highly in quality of life, health, education, protection of civil liberties, economic competitiveness, income equality, gender equality, prosperity and human development. Sweden joined the European Union on 1 January 1995, but has rejected NATO membership, as well as Eurozone membership following a referendum. It is also a member of the United Nations, the Nordic Council, the Council of Europe, the World Trade Organization and the Organisation for Economic Co-operation and Development .

Nationalmuseum is the national gallery of Sweden, located on the peninsula Blasieholmen in central Stockholm.

Gothenburg Museum of Art is located at Götaplatsen in Gothenburg, Sweden.

Skokloster Castle is a Swedish Baroque castle built between 1654 and 1676 by Carl Gustaf Wrangel, located on a peninsula of Lake Mälaren between Stockholm and Uppsala. It became a state museum in the 1970s and displays collections of paintings, furniture, textiles and tableware as well as books and weapons that amounts to 20 thousand items.

The Zorn Collections, or Zornsamlingarna, is a Swedish state museum, located in Mora, dedicated to preserving the works by painter Anders Zorn. Anders Zorn was one of Sweden's internationally best known artists. His fame abroad was founded mainly on his portraiture, with his ability to capture the character and personality of the depicted person. His nude studies are also very famous, as are his genre pictures which mostly depict working people and in which his swift and elegant impressionistic technique found its fullest scope. The Zorn Collections administers Anders and Emma Zorn's donation to the Swedish State. The Zorn Collections consists of four museums: Zorngården, Zorn Museum, Zorn's Gammelgård & Textilkammare and Zorn's Gopsmor.

The Thiel Gallery is an art museum in the Djurgården park area of Stockholm, Sweden. Represented are the members of the Artists Association from the early 1900s as well as one of the world's largest collections of works by Edvard Munch.

Moderna Museet , Stockholm, Sweden, is a state museum for modern and contemporary art located on the island of Skeppsholmen in central Stockholm, opened in 1958. In 2009, the museum opened a new branch in Malmö in the south of Sweden, Moderna Museet Malmö.

The Uppsala University Library at Uppsala University in Uppsala, Sweden, consists of 11 subject libraries, one of which is housed in the old main library building, Carolina Rediviva. The library holds books and periodicals, manuscripts, musical scores, pictures and maps.

Gripsholm Castle is a castle in Mariefred, Södermanland, Sweden. It is located by lake Mälaren in south central Sweden, in the municipality of Strängnäs, about 60 km west of Stockholm. Since Gustav Vasa, Gripsholm has belonged to the Swedish Royal Family and was used as one of their residences until the 18th century. It is now a museum, but it is still considered to be a palace at the disposal of the King and as such it is part of the Crown palaces in Sweden.

Hallwyl Museum is a Swedish national museum housed in the historical Hallwyl House in central Stockholm located on 4, Hamngatan facing Berzelii Park. The house once belonged to the Count and Countess von Hallwyl, but was donated to the Swedish state in 1920 to eventually become a museum. In 1938, the museum was officially opened.