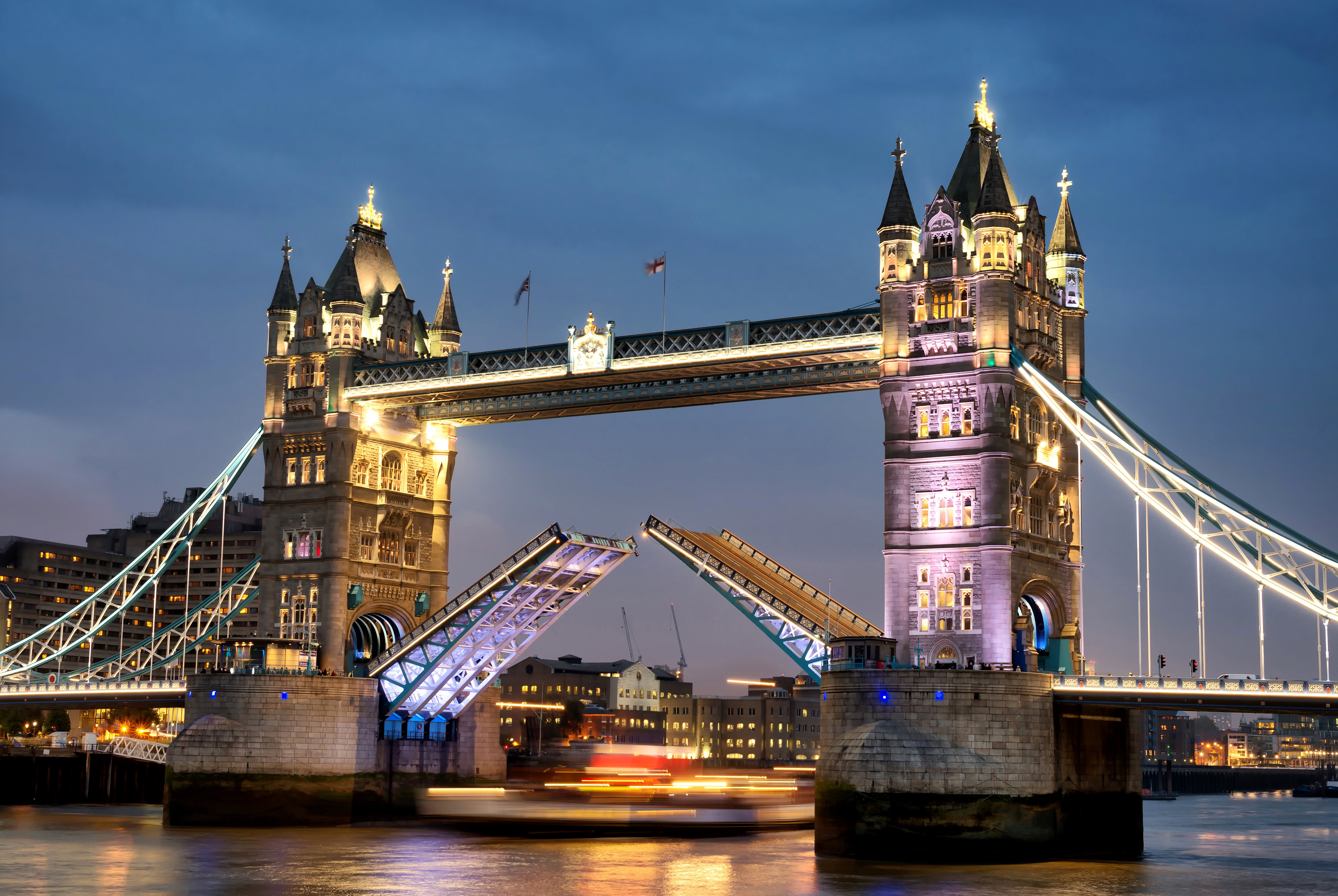 The United Kingdom of Great Britain and Northern Ireland, commonly known as the United Kingdom or Britain, is a sovereign country located off the north­western coast of the European mainland. The United Kingdom includes the island of Great Britain, the north­eastern part of the island of Ireland, and many smaller islands. Northern Ireland shares a land border with the Republic of Ireland. Otherwise, the United Kingdom is surrounded by the Atlantic Ocean, with the North Sea to the east, the English Channel to the south and the Celtic Sea to the southwest, giving it the 12th-longest coastline in the world. The Irish Sea separates Great Britain and Ireland. The total area of the United Kingdom is 94,000 square miles . The United Kingdom is a unitary parliamentary democracy and constitutional monarchy. The monarch is Queen Elizabeth II, who has reigned since 1952, making her the world's longest-serving current head of state. The United Kingdom's capital is London, a global city and financial centre with an urban area population of 10.3 million. The United Kingdom consists of four countries: England, Scotland, Wales and Northern Ireland. Their capitals are London, Edinburgh, Cardiff and Belfast, respectively. Apart from England, the countries have their own devolved governments, each with varying powers. Other major cities include Birmingham, Glasgow, Leeds, Liverpool, and Manchester. The nearby Isle of Man, Bailiwick of Guernsey and Bailiwick of Jersey are not part of the UK, being Crown dependencies with the British Government responsible for defence and international representation. The union between the Kingdom of England and the Kingdom of Scotland in 1707 to form the Kingdom of Great Britain, followed by the union in 1801 of Great Britain with the Kingdom of Ireland created the United Kingdom of Great Britain and Ireland. Five-sixths of Ireland seceded from the UK in 1922, leaving the present formulation of the United Kingdom of Great Britain and Northern Ireland. The UK's name was adopted in 1927 to reflect the change. There are fourteen British Overseas Territories, the remnants of the British Empire which, at its height in the 1920s, encompassed almost a quarter of the world's landmass and was the largest empire in history. British influence can be observed in the language, culture and political systems of many of its former colonies. The United Kingdom has the world's sixth-largest economy by nominal gross domestic product , and the ninth-largest by purchasing power parity . It has a high-income economy and a very high human development index rating, ranking 15th in the world. It was the world's first industrialised country and the world's foremost power during the 19th and early 20th centuries. The UK remains a great power, with considerable economic, cultural, military, scientific and political influence internationally. It is a recognised nuclear weapons state and is sixth in military expenditure in the world. It has been a permanent member of the United Nations Security Council since its first session in 1946. The United Kingdom is a leading member of the Commonwealth of Nations, the Council of Europe, the G7, the G20, NATO, the Organisation for Economic Co-operation and Development , Interpol and the World Trade Organization . It was a member of the European Union and its predecessor, the European Economic Community from 1 January 1973 until withdrawing on 31 January 2020.

The Fitzwilliam Museum is the art and antiquities museum of the University of Cambridge. It is located on Trumpington Street opposite Fitzwilliam Street in central Cambridge. It was founded in 1816 under the will of Richard FitzWilliam, 7th Viscount FitzWilliam , and comprises one of the best collections of antiquities and modern art in western Europe. With over half a million objects and artworks in its collections, the displays in the Museum explore world history and art from antiquity to the present. The treasures of the museum include artworks by Monet, Picasso, Rubens, Vincent van Gogh, Rembrandt, Cézanne, Van Dyck, and Canaletto, as well as a winged bas-relief from Nimrud. Admission to the public is always free.The museum is a partner in the University of Cambridge Museums consortium, one of 16 Major Partner Museum services funded by Arts Council England to lead the development of the museums sector.

The Ashmolean Museum of Art and Archaeology on Beaumont Street, Oxford, England, is the world's first university museum and Britain's first public museum. Its first building was erected in 1678–1683 to house the cabinet of curiosities that Elias Ashmole gave to the University of Oxford in 1677. The present building was erected 1841–1845. The museum reopened in 2009 after a major redevelopment. In November 2011, new galleries focusing on Egypt and Nubia were unveiled. In May 2016, the museum opened new galleries of 19th-century art.

The Ulster Museum, located in the Botanic Gardens in Belfast, has around 8,000 square metres of public display space, featuring material from the collections of fine art and applied art, archaeology, ethnography, treasures from the Spanish Armada, local history, numismatics, industrial archaeology, botany, zoology and geology. It is the largest museum in Northern Ireland, and one of the components of National Museums Northern Ireland.

Stirling Smith Art Gallery and Museum is an institution based in Stirling, Central Scotland, dedicated to the promotion of cultural and historical heritage and the arts, from a local scale to nationally and beyond. It is also known locally by its original name of "The Smith Institute".

The Laing Art Gallery in Newcastle upon Tyne, England, is located on New Bridge Street. The gallery was designed in the Baroque style with Art Nouveau elements by architects Cackett & Burns Dick and is now a Grade II listed building. It was opened in 1904 and is now managed by Tyne & Wear Archives & Museums and sponsored by the Department for Culture, Media and Sport. In front of the gallery is the Blue Carpet. The building is Grade II listed.The gallery collection contains paintings, watercolours and decorative historical objects, including Newcastle silver. In the early 1880s, Newcastle was a major glass producer in the world and enamelled glasses by William Beilby are on view along with ceramics , and diverse contemporary works by emerging UK artists. It has a programme of regularly rotating exhibitions and has free entry. The gallery's collection of seminal paintings includes John Martin's dramatic The Destruction of Sodom and Gomorrah, as well as important works by Sir Joshua Reynolds, Edward Burne-Jones ,, Isabella and the Pot of Basil from 1868 by William Holman Hunt, and Ben Nicholson. Local paintings include pictures by Ralph Hedley. There is also an extensive collection of 18th- and 19th-century watercolours and drawings, including work by J. M. W. Turner and John Sell Cotman.

Bristol Museum & Art Gallery is a large museum and art gallery in Bristol, England. The museum is situated in Clifton, about 0.5 miles from the city centre. As part of Bristol Culture it is run by the Bristol City Council with no entrance fee. It holds designated museum status, granted by the national government to protect outstanding museums. The designated collections include: geology, Eastern art, and Bristol's history, including English delftware. In January 2012 it became one of sixteen Arts Council England Major Partner Museums.The museum includes sections on natural history as well as local, national and international archaeology. The art gallery contains works from all periods, including many by internationally famous artists, as well a collection of modern paintings of Bristol. In the summer of 2009 the museum hosted an exhibition by Banksy, featuring more than 70 works of art, including animatronics and installations; it is his largest exhibition yet. It was developed in secrecy and with no advance publicity, but soon gained worldwide notoriety. The building is of Edwardian Baroque architecture and has been designated by English Heritage as a grade II* listed building.The standard opening hours are: Tuesday – Sunday, 10am–5pm. The museum is also open 10am-5pm on Bank Holiday Mondays and Mondays during Bristol school holidays.

The Guildhall Art Gallery houses the art collection of the City of London, England. It is a stone building in a semi-Gothic style intended to be sympathetic to the historic Guildhall, which is adjacent and to which it is connected internally.

The Wallace Collection is a museum in London occupying Hertford House in Manchester Square, the former townhouse of the Seymour family, Marquesses of Hertford. It is named after Sir Richard Wallace, who built the extensive collection, along with the Marquesses of Hertford, in the 18th and 19th centuries. The collection features fine and decorative arts from the 15th to the 19th centuries with important holdings of French 18th-century paintings, furniture, arms and armour, porcelain and Old Master paintings arranged into 25 galleries. It is open to the public and entry is free.It was established in 1897 from the private collection mainly created by Richard Seymour-Conway, 4th Marquess of Hertford , who left both it and the house to his illegitimate son Sir Richard Wallace , whose widow bequeathed the entire collection to the nation. The collection opened to permanent public view in 1900 in Hertford House, and remains there to this day. A condition of the bequest was that no object should ever leave the collection, even for loan exhibitions. In September 2019, the Board of Trustees announced that they had successfully obtained an Order from the Charity Commission for England & Wales which allowed them to enter into temporary loan agreements for the first time.The United Kingdom is particularly rich in the works of the ancien régime, purchased by wealthy families during the revolutionary sales, held in France after the end of the French Revolution. The triumvirate of The Wallace Collection, Waddesdon Manor and the Royal Collection, all three located in the United Kingdom, forms arguably the largest, most important and extant collection of French 18th-century decorative arts in the world, rivalled only by the triumvirate of the Musée du Louvre, Château de Versailles and Mobilier National in France. The Wallace Collection is a non-departmental public body and the current director is Xavier Bray.

The Royal West of England Academy is Bristol's oldest art gallery, located in Clifton, Bristol, near the junction of Queens Road and Whiteladies Road. Situated in a Grade 2* listed building, it hosts five galleries and an exhibition programme that celebrates the best of historic and contemporary British art.