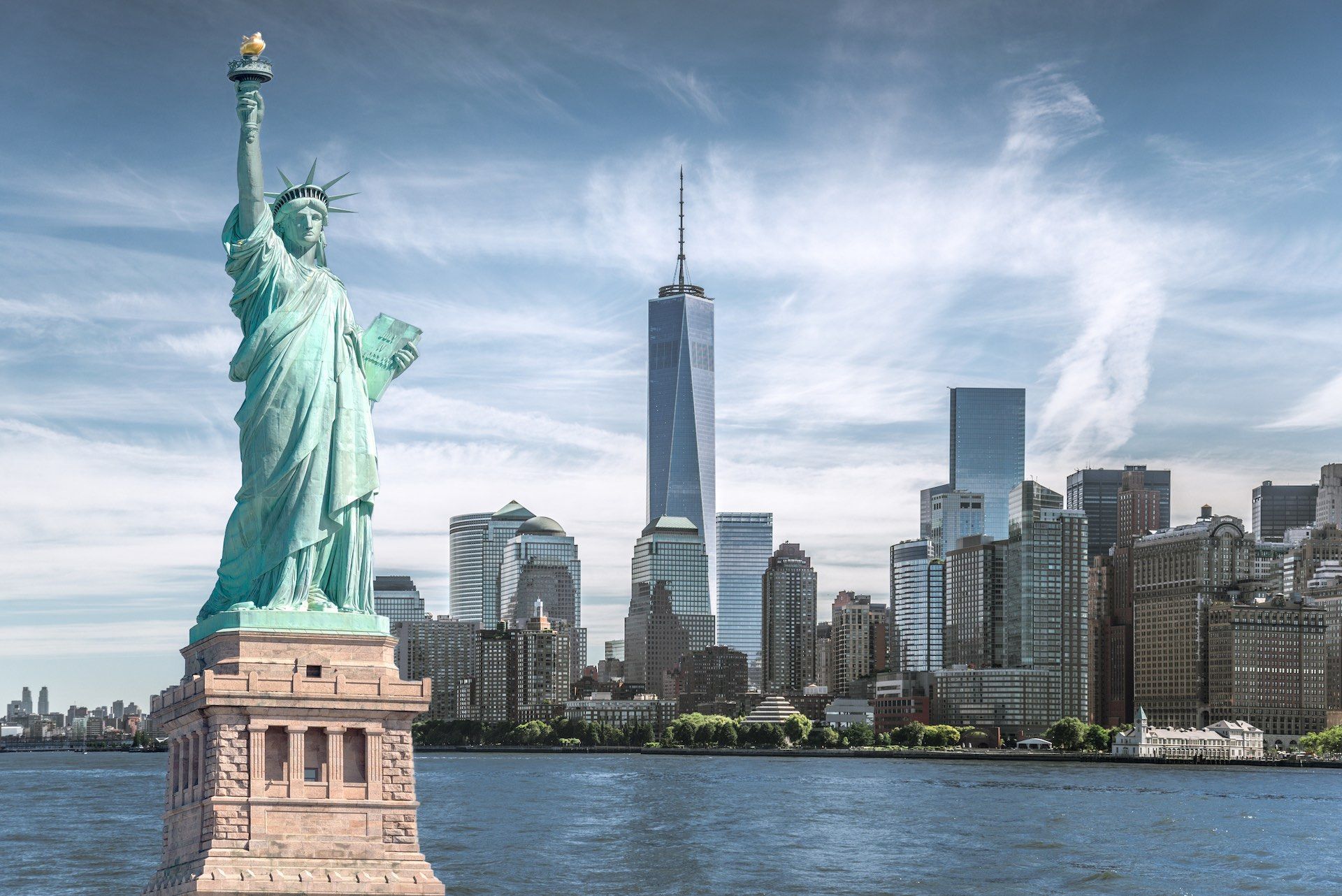 The United States of America , commonly known as the United States or America, is a country mostly located in central North America, between Canada and Mexico. It consists of 50 states, a federal district, five major self-governing territories, and various possessions. At 3.8 million square miles , it is the world's third- or fourth-largest country by total area. With a population of over 328 million, it is the third most populous country in the world. The country's capital is Washington, D.C., and its most populous city is New York City. Paleo-Indians migrated from Siberia to the North American mainland at least 12,000 years ago, and European colonization began in the 16th century. The United States emerged from the thirteen British colonies established along the East Coast. Disputes with Great Britain led to the American Revolutionary War , which established independence. In the late 18th century, the U.S. began vigorously expanding across North America, gradually acquiring new territories, oftentimes conquering and displacing Native Americans, and admitting new states; by 1848, the United States spanned the continent. Slavery was legal in the southern United States until the second half of the 19th century, when the American Civil War led to its abolition. The Spanish–American War and World War I established the U.S. as a world power, a status confirmed by the outcome of World War II. During the Cold War, the United States and the Soviet Union engaged in various proxy wars, but avoided direct military conflict. They also competed in the Space Race, culminating in the 1969 spaceflight that first landed humans on the Moon. The Soviet Union's collapse in 1991 ended the Cold War and left the United States as the world's sole superpower. The United States is a federal republic and a representative democracy with three separate branches of government, including a bicameral legislature. It is a founding member of the United Nations, World Bank, International Monetary Fund, Organization of American States , NATO, and other international organizations. It is a permanent member of the United Nations Security Council. The U.S. ranks high in international measures of economic freedom, government corruption, quality of life, and quality of higher education. Despite income and wealth disparities, the United States continues to rank high in measures of socioeconomic performance. It is one of the most racially and ethnically diverse nations, and its population has been shaped through centuries of immigration. A highly developed country, the United States accounts for approximately a quarter of global gross domestic product and is the world's largest economy by nominal GDP. By value, the United States is the world's largest importer and the second-largest exporter of goods. Although its population is only 4.3% of the world total, it holds 29.4% of the total wealth in the world, the largest share held by any country. Making up more than a third of global military spending, it is the foremost military power in the world, and is a leading political, cultural, and scientific force internationally.

The Yale Center for British Art at Yale University in downtown New Haven, Connecticut, houses the largest and most comprehensive collection of British art outside the United Kingdom. The collection of paintings, sculpture, drawings, prints, rare books, and manuscripts reflects the development of British art and culture from the Elizabethan period onward.

The Brooklyn Museum is an art museum located in the New York City borough of Brooklyn. At 560,000 square feet , the museum is New York City's third largest in physical size and holds an art collection with roughly 1.5 million works.Located near the Prospect Heights, Crown Heights, Flatbush, and Park Slope neighborhoods of Brooklyn and founded in 1895, the Beaux-Arts building, designed by McKim, Mead and White, was planned to be the largest art museum in the world. The museum initially struggled to maintain its building and collection, only to be revitalized in the late 20th century, thanks to major renovations. Significant areas of the collection include antiquities, specifically their collection of Egyptian antiquities spanning over 3,000 years. European, African, Oceanic, and Japanese art make for notable antiquities collections as well. American art is heavily represented, starting at the Colonial period. Artists represented in the collection include Mark Rothko, Edward Hopper, Norman Rockwell, Winslow Homer, Edgar Degas, Georgia O'Keeffe, and Max Weber. The museum also has a "Memorial Sculpture Garden" which features salvaged architectural elements from throughout New York City.

The Harvard Art Museums are part of Harvard University and comprise three museums: the Fogg Museum , the Busch-Reisinger Museum , and the Arthur M. Sackler Museum and four research centers: the Archaeological Exploration of Sardis , the Center for the Technical Study of Modern Art , the Harvard Art Museums Archives, and the Straus Center for Conservation and Technical Studies . The three museums that constitute the Harvard Art Museums were initially integrated into a single institution under the name Harvard University Art Museums in 1983. The word "University" was dropped from the institutional name in 2008. The collections include approximately 250,000 objects in all media, ranging in date from antiquity to the present and originating in Europe, North America, North Africa, the Middle East, South Asia, East Asia, and Southeast Asia.

The Yale University Art Gallery, the oldest university art museum in the western hemisphere, houses a significant and encyclopedic collection of art in several buildings on the campus of Yale University in New Haven, Connecticut. Although it embraces all cultures and periods, the gallery emphasizes early Italian painting, African sculpture, and modern art. The museum is a member of the North American Reciprocal Museums program.

The Cleveland Museum of Art is an art museum in Cleveland, Ohio, located in the Wade Park District, in the University Circle neighborhood on the city's east side. Internationally renowned for its substantial holdings of Asian and Egyptian art, the museum houses a diverse permanent collection of more than 61,000 works of art from around the world. The museum provides general admission free to the public. With a $755 million endowment, it is the fourth-wealthiest art museum in the United States. With about 770,000 visitors annually , it is one of the most visited art museums in the world.

The New-York Historical Society is an American history museum and library located in New York City, at the corner of 77th Street and Central Park West, on the Upper West Side of Manhattan. The society was founded in 1804 as New York's first museum. It presents exhibitions, public programs, and research that explore the rich history of New York and the nation. The New-York Historical Society Museum & Library has been at its present location since 1908. The granite building was designed by York & Sawyer in a classic Roman Eclectic style. A renovation of the landmark building was completed in November 2011 that made it more open to the public, provided space for an interactive children's museum, and accomplished other changes to enhance access to its collections. Louise Mirrer has been the president of the Historical Society since 2004. She was previously Executive Vice Chancellor for Academic Affairs of the City University of New York. Beginning in 2005, the museum presented a groundbreaking two-year exhibit on Slavery in New York, its largest theme exhibition in 200 years on a topic which it had never addressed before. It included an art exhibit by artists invited to use museum collections in their works. The Society generally focuses on the developing city center in Manhattan. Another historical society, the Long Island Historical Society was founded in Brooklyn in 1863. The New-York Historical Society holds an extensive collection of historical artifacts, works of American art, and other materials documenting the history of New York and the United States. It presents well-researched exhibitions on a variety of topics and periods in American history, such as George Washington, Alexander Hamilton, Slavery in New York, The Hudson River School, Abraham Lincoln, Ulysses S. Grant, Tiffany designer Clara Driscoll, and the history of the Constitution. The Society also offers an extensive range of curriculum-based school programs and teacher resources, and provides academic fellowships and organizes public programs for adults to foster lifelong learning and a deep appreciation of history.