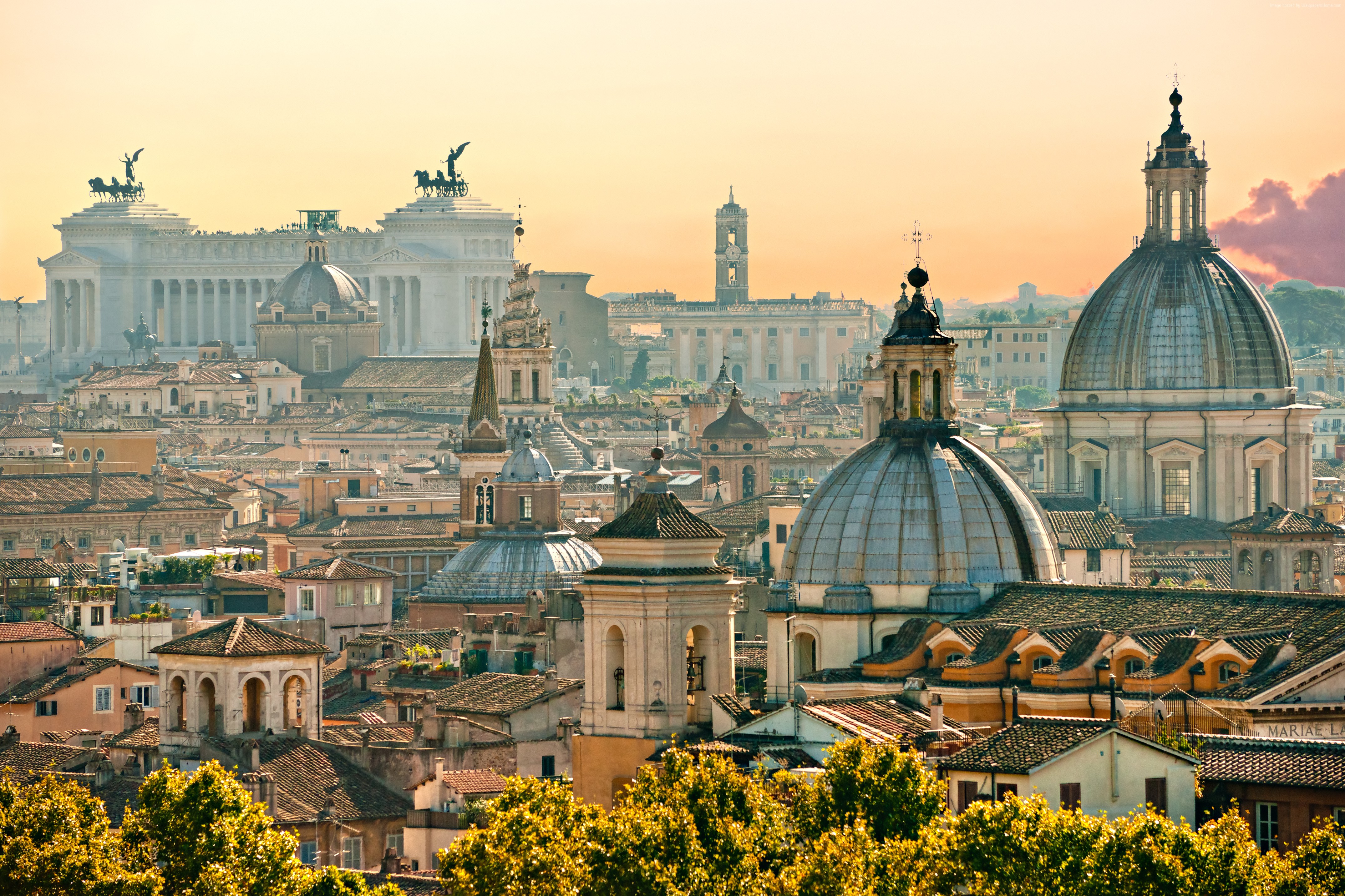 Vatican City ), officially the Vatican City State , is the Holy See's independent city state, an enclave within Rome, Italy. The Vatican City State, also known as The Vatican, became independent from Italy with the Lateran Treaty , and it is a distinct territory under "full ownership, exclusive dominion, and sovereign authority and jurisdiction" of the Holy See, itself a sovereign entity of international law, which maintains the city state's temporal, diplomatic, and spiritual independence. With an area of 49 hectares and a population of about 825, it is the smallest sovereign state in the world by both area and population.As governed by the Holy See, the Vatican City State is an ecclesiastical or sacerdotal-monarchical state ruled by the pope who is the bishop of Rome and head of the Catholic Church. The highest state functionaries are all Catholic clergy of various national origins. After the Avignon Papacy , the popes have mainly resided at the Apostolic Palace within what is now Vatican City, although at times residing instead in the Quirinal Palace in Rome or elsewhere. The Holy See dates back to Early Christianity and is the principal episcopal see of the Catholic Church, which has approximately 1.313 billion baptised Catholic Christians in the world as of 2017 in the Latin Church and 23 Eastern Catholic Churches. The independent state of Vatican City, on the other hand, came into existence on 11 February 1929 by the Lateran Treaty between the Holy See and Italy, which spoke of it as a new creation, not as a vestige of the much larger Papal States , which had previously encompassed much of central Italy. Within the Vatican City are religious and cultural sites such as St. Peter's Basilica, the Sistine Chapel, and the Vatican Museums. They feature some of the world's most famous paintings and sculptures. The unique economy of Vatican City is supported financially donations from the faithful, by the sale of postage stamps and souvenirs, fees for admission to museums, and sales of publications. The current head of state is the Pope Francis, the first Pope from the Americas.

The Sistine Chapel is a chapel in the Apostolic Palace, the official residence of the pope, in Vatican City. Originally known as the Cappella Magna , the chapel takes its name from Pope Sixtus IV, who restored it between 1473 and 1481. Since that time, the chapel has served as a place of both religious and functionary papal activity. Today, it is the site of the papal conclave, the process by which a new pope is selected. The fame of the Sistine Chapel lies mainly in the frescos that decorate the interior, most particularly the Sistine Chapel ceiling and The Last Judgment by Michelangelo. During the reign of Sixtus IV, a team of Renaissance painters that included Sandro Botticelli, Pietro Perugino, Pinturicchio, Domenico Ghirlandaio and Cosimo Rosselli, created a series of frescos depicting the Life of Moses and the Life of Christ, offset by papal portraits above and trompe-l'œil drapery below. These paintings were completed in 1482, and on 15 August 1483 Sixtus IV celebrated the first mass in the Sistine Chapel for the Feast of the Assumption, at which ceremony the chapel was consecrated and dedicated to the Virgin Mary.Between 1508 and 1512, under the patronage of Pope Julius II, Michelangelo painted the chapel's ceiling, a project which changed the course of Western art and is regarded as one of the major artistic accomplishments of human civilization. In a different climate, after the Sack of Rome, he returned and, between 1535 and 1541, painted The Last Judgment for Popes Clement VII and Paul III. The fame of Michelangelo's paintings has drawn multitudes of visitors to the chapel ever since they were revealed five hundred years ago.

The Vatican Museums are the public art and sculpture museums in the Vatican City. They display works from the immense collection amassed by the Catholic Church and the papacy throughout the centuries including several of the most renowned Roman sculptures and most important masterpieces of Renaissance art in the world. The museums contain roughly 70,000 works, of which 20,000 are on display, and currently employ 640 people who work in 40 different administrative, scholarly, and restoration departments.Pope Julius II founded the museums in the early 16th century. The Sistine Chapel with its ceiling decorated by Michelangelo and the Stanze di Raffaello decorated by Raphael are on the visitor route through the Vatican Museums. In 2019, they were visited by 6,882,931 persons, which combined made them the third most visited art museum in the world. They are one of the largest museums in the world. There are 54 galleries, or sale, in total, with the Sistine Chapel, notably, being the very last sala within the Museum.

The Papal Basilica of Saint Peter in the Vatican , or simply Saint Peter's Basilica , is a church built in the Renaissance style located in Vatican City, the papal enclave which is within the city of Rome. Designed principally by Donato Bramante, Michelangelo, Carlo Maderno and Gian Lorenzo Bernini, St. Peter's is the most renowned work of Renaissance architecture and the largest church in the world. While it is neither the mother church of the Catholic Church nor the cathedral of the Diocese of Rome , St. Peter's is regarded as one of the holiest Catholic shrines. It has been described as "holding a unique position in the Christian world" and as "the greatest of all churches of Christendom".Catholic tradition holds that the basilica is the burial site of Saint Peter, chief among Jesus's apostles and also the first Bishop of Rome . Saint Peter's tomb is supposedly directly below the high altar of the basilica. For this reason, many popes have been interred at St. Peter's since the Early Christian period. A church has stood on this site since the time of the Roman emperor Constantine the Great. Old St. Peter's Basilica dates from the 4th century AD. Construction of the present basilica began on 18 April 1506 and was completed on 18 November 1626.St. Peter's is famous as a place of pilgrimage and for its liturgical functions. The pope presides at a number of liturgies throughout the year both within the basilica or the adjoining St. Peter's Square; these liturgies draw audiences numbering from 15,000 to over 80,000 people. St. Peter's has many historical associations, with the Early Christian Church, the Papacy, the Protestant Reformation and Catholic Counter-reformation and numerous artists, especially Michelangelo. As a work of architecture, it is regarded as the greatest building of its age. St. Peter's is one of the four churches in the world that hold the rank of major basilica, all four of which are in Rome. Contrary to popular misconception, it is not a cathedral because it is not the seat of a bishop; the cathedra of the pope as Bishop of Rome is at Saint John Lateran.

The Vatican Apostolic Library , more commonly known as the Vatican Library or informally as the Vat, is the library of the Holy See, located in Vatican City. Formally established in 1475, although it is much older, it is one of the oldest libraries in the world and contains one of the most significant collections of historical texts. It has 75,000 codices from throughout history, as well as 1.1 million printed books, which include some 8,500 incunabula. The Vatican Library is a research library for history, law, philosophy, science and theology. The Vatican Library is open to anyone who can document their qualifications and research needs. Photocopies for private study of pages from books published between 1801 and 1990 can be requested in person or by mail. Pope Nicholas V envisioned a new Rome with extensive public works to lure pilgrims and scholars to the city to begin its transformation. Nicolas wanted to create a 'public library' for Rome that was meant to be seen as an institution for humanist scholarship. His death prevented him from carrying out his plan, but his successor Pope Sixtus IV established what is now known as the Vatican Library. In March 2014, the Vatican Library began an initial four-year project of digitising its collection of manuscripts, to be made available online. The Vatican Apostolic Archive was separated from the library at the beginning of the 17th century; it contains another 150,000 items.

The Apostolic Palace is the official residence of the pope, the head of the Catholic Church, located in Vatican City. It is also known as the Papal Palace, the Palace of the Vatican and the Vatican Palace. The Vatican itself refers to the building as the Palace of Sixtus V, in honor of Pope Sixtus V, who built most of the present form of the palace. The building contains the Papal Apartments, various offices of the Catholic Church and the Holy See, private and public chapels, Vatican Museums, and the Vatican Library, including the Sistine Chapel, Raphael Rooms, and Borgia Apartment. The modern tourist can see these last and other parts of the palace, but other parts, such as the Sala Regia and Cappella Paolina, had long been closed to tourists, though the Sala Regia allowed occasional tourism by 2019. The Scala Regia can be viewed from one end and used to enter the Sala Regia. The Cappella Paolina, however, remains closed to tourists.

The Gregorian Tower or Tower of the Winds is a square tower and early modern observatory located above the Gallery of Maps, which connects the Villa Belvedere with the Apostolic Palace in Vatican City. The tower was built between 1578 and 1580 to a design by the Bolognese architect Ottaviano Mascherino mainly to promote the study of astronomy for the Gregorian Calendar Reform which was commissioned by Pope Gregory XIII and promulgated in 1582. It was then also known as the Tower of Winds. The tower was also called "Specola Astronomica Vaticana", a reference to the Vatican Observatory. Four stages of progressive development have occurred since it was first established. The tower was an edifice of great value for astronomical observations made using a sundial as they provided essential confirmation of the need to reform the Julian calendar.

The Vatican Necropolis lies under the Vatican City, at depths varying between 5–12 metres below Saint Peter's Basilica. The Vatican sponsored archeological excavations under Saint Peter's in the years 1940–1949 which revealed parts of a necropolis dating to Imperial times. The work was undertaken at the request of Pope Pius XI who wished to be buried as close as possible to Peter the Apostle. It is also home to the Tomb of the Julii, which has been dated to the third or fourth century. The necropolis was not originally one of the Catacombs of Rome, but an open air cemetery with tombs and mausolea. The Vatican Necropolis is not to be confused with the Vatican grottoes, the latter of which resulted from the construction of St. Peter's Church and is located on the ground level of the old Constantinian basilica.