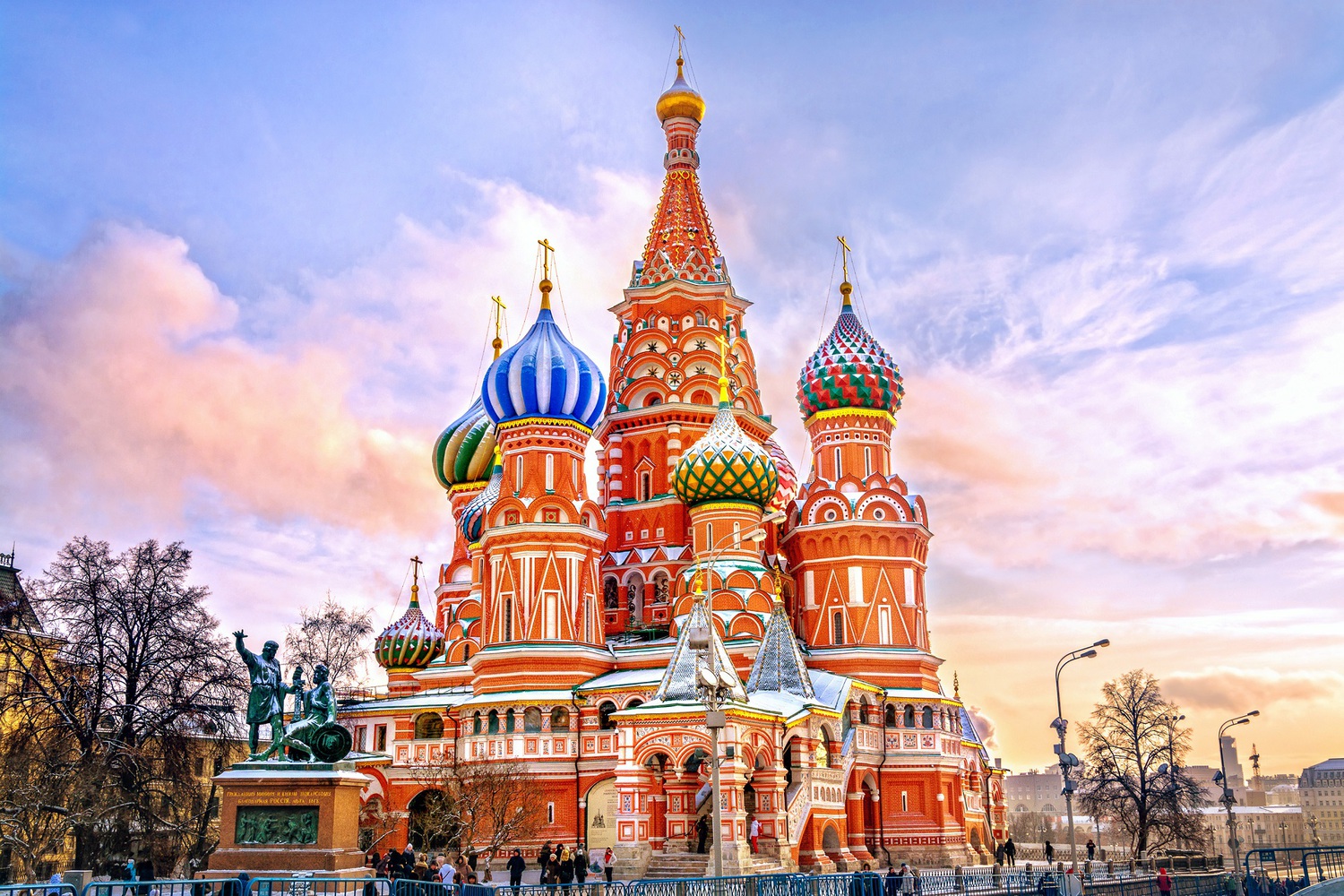 Russia, or the Russian Federation, is a transcontinental country located in Eastern Europe and Northern Asia. Covering an area of 17,125,200 square kilometres , it is the largest country in the world by area, spanning more than one-eighth of the Earth's inhabited land area, stretching eleven time zones, and bordering 16 sovereign nations. The territory of Russia extends from the Baltic Sea in the west to the Pacific Ocean in the east, and from the Arctic Ocean in the north to the Black Sea and the Caucasus in the south. With 146.7 million inhabitants living in the country's 85 federal subjects, Russia is the most populous nation in Europe and the ninth-most populous nation in the world. Russia's capital and largest city is Moscow; other major urban areas include Saint Petersburg, Novosibirsk, Yekaterinburg, Nizhny Novgorod, Kazan, Chelyabinsk and Samara. The East Slavs emerged as a recognisable group in Europe between the 3rd and 8th centuries AD. The medieval state of Rus' arose in the 9th century. In 988 it adopted Orthodox Christianity from the Byzantine Empire, beginning the synthesis of Byzantine and Slavic cultures that defined Russian culture for the next millennium. Rus' ultimately disintegrated into a number of smaller states, until it was finally reunified by the Grand Duchy of Moscow in the 15th century. By the 18th century, the nation had greatly expanded through conquest, annexation, and exploration to become the Russian Empire, which became a major European power, and the third-largest empire in history, stretching from Norway on the west to Canada on the east. Following the Russian Revolution, the Russian SFSR became the largest and leading constituent of the Soviet Union, the world's first constitutionally socialist state. The Soviet Union played a decisive role in the Allied victory in World War II, and emerged as a recognised superpower and rival to the United States during the Cold War. The Soviet era saw some of the most significant technological achievements of the 20th century, including the world's first human-made satellite and the launching of the first humans in space. Following the dissolution of the Soviet Union in 1991, the Russian SFSR reconstituted itself as the Russian Federation and is recognised as the continuing legal personality and a successor of the USSR.Following the constitutional crisis of 1993, a new constitution was adopted and Russia has been governed as a federal semi-presidential republic. Vladimir Putin became acting president on 31 December 1999 after Russia's first president, Boris Yeltsin, resigned and he was elected president in March 2000. Since then, he has dominated Russia's political system as either president or prime minister. His government has been accused by non-governmental organisations of human rights abuses, authoritarianism and corruption. The Russian economy ranks as the fifth-largest in Europe, the eleventh-largest in the world by nominal GDP and the fifth-largest by PPP. Russia's extensive mineral and energy resources are the largest such reserves in the world, making it one of the leading producers of oil and natural gas globally. The country is one of the five recognised nuclear weapons states and possesses the largest stockpile of nuclear warheads. Russia is a major great power, as well as a regional power, and has been characterised as a potential superpower. The Russian Armed Forces have been ranked as the world's second most powerful, and the most powerful in Europe. Russia hosts the world's ninth-greatest number of UNESCO World Heritage Sites, at 29, and is among the world's most popular tourist destinations. It is a permanent member of the United Nations Security Council and an active global partner of ASEAN, as well as a member of the Shanghai Cooperation Organisation , the G20, the Council of Europe, the Asia-Pacific Economic Cooperation , the Organization for Security and Co-operation in Europe , the International Investment Bank and the World Trade Organization , as well as being the leading member of the Commonwealth of Independent States , the Collective Security Treaty Organization and a member of the Eurasian Economic Union .

The State Hermitage Museum is a museum of art and culture in Saint Petersburg, Russia. The second-largest art museum in the world, it was founded in 1764 when Empress Catherine the Great acquired an impressive collection of paintings from the Berlin merchant Johann Ernst Gotzkowsky. The museum celebrates the anniversary of its founding each year on 7 December, Saint Catherine's Day. It has been open to the public since 1852. It attracted 4,956,524 visitors in 2019, ranking it eighth among the most visited art museums in the world.Its collections, of which only a small part is on permanent display, comprise over three million items , including the largest collection of paintings in the world. The collections occupy a large complex of six historic buildings along Palace Embankment, including the Winter Palace, a former residence of Russian emperors. Apart from them, the Menshikov Palace, Museum of Porcelain, Storage Facility at Staraya Derevnya, and the eastern wing of the General Staff Building are also part of the museum. The museum has several exhibition centers abroad. The Hermitage is a federal state property. Since July 1992, the director of the museum has been Mikhail Piotrovsky.Of the six buildings in the main museum complex, five—namely the Winter Palace, Small Hermitage, Old Hermitage, New Hermitage, and Hermitage Theatre—are open to the public. The entrance ticket for foreign tourists costs more than the fee paid by citizens of Russia and Belarus. However, entrance is free of charge the third Thursday of every month for all visitors, and free daily for students and children. The museum is closed on Mondays. The entrance for individual visitors is located in the Winter Palace, accessible from the Courtyard.

The State Tretyakov Gallery is an art gallery in Moscow, Russia, the foremost depository of Russian fine art in the world. The gallery's history starts in 1856 when the Moscow merchant Pavel Mikhailovich Tretyakov acquired works by Russian artists of his day with the aim of creating a collection, which might later grow into a museum of national art. In 1892, Tretyakov presented his already famous collection of approximately 2,000 works to the Russian nation.The façade of the gallery building was designed by the painter Viktor Vasnetsov in a peculiar Russian fairy-tale style. It was built in 1902–04 to the south from the Moscow Kremlin. During the 20th century, the gallery expanded to several neighboring buildings, including the 17th-century church of St. Nicholas in Tolmachi. The collection contains more than 130,000 exhibits, ranging from Theotokos of Vladimir and Andrei Rublev's Trinity to the monumental Composition VII by Wassily Kandinsky and the Black Square by Kazimir Malevich. In 1977 the Gallery kept a significant part of the George Costakis collection. In May 2012, the Tretyakov Art Gallery played host to the prestigious FIDE World Chess Championship between Viswanathan Anand and Boris Gelfand as the organizers felt the event would promote both chess and art at the same time.

The State Russian Museum , formerly the Russian Museum of His Imperial Majesty Alexander III , on Arts Square in Saint Petersburg, is the world's largest depository of Russian fine art. It is also one of the largest art museums in the world with total area over 30 hectares.

The Pushkin State Museum of Fine Arts is the largest museum of European art in Moscow, located in Volkhonka street, just opposite the Cathedral of Christ the Saviour. The International musical festival Sviatoslav Richter's December nights has been held in the Pushkin Museum since 1981.

The Radishchev Museum in Saratov opened to the public on June 29, 1885. It is supposed to have been Russia's first major public art museum outside Moscow or St. Petersburg. It was founded by Alexey Bogolyubov and named after his grandfather, the 18th-century revolutionary writer Alexander Radishchev. The naming of the museum after the "first Russian revolutionary", Alexander Radishchev, was a direct challenge to the authorities: Bogolyubov had to endure a legal battle to get permission. It was the first art museum in Russia open to everybody. It was opened to the general public seven years earlier than the Tretyakov Gallery in Moscow and fifteen years earlier than the Russian Museum in Saint Petersburg. It includes work by Camille Corot, Ivan Kramskoy, Vasily Polenov, Ilya Repin, Ivan Shishkin, Fyodor Vasilyev, Aleksandra Ekster, Pavel Kuznetsov, Aristarkh Lentulov, Robert Falk, Pyotr Konchalovsky, Martiros Saryan, Fyodor Rokotov and others. Early donors included Pavel Tretyakov and Pauline Viardot.

Central Naval Museum is a naval museum in St Petersburg, Russia. It is one of the first museums in Russia and one of the world’s largest naval museums, with a large collection of artefacts, models and paintings reflecting the development of Russian naval traditions and the history of the Russian Navy. The museum’s permanent display includes such relics as the Botik of Peter the Great, Catherine II’s marine throne, trophies captured in sea battles, and the personal belongings of prominent Russian and Soviet naval commanders. The collection includes paintings by Ivan Aivazovsky, Alexey Bogolyubov, Lev Lagorio and other marine artists, ship sculpture, navigational instruments, naval equipment and machinery from the 17th to 20th centuries and numerous models of ships. The main exposition consists of nineteen halls. There is a complex of six museum halls for exhibitions.

Omsk is a city and the administrative center of Omsk Oblast, Russia, located in southwestern Siberia 2,236 kilometers from Moscow. With a population of 1,154,116, it is Russia's third-largest city east of the Ural Mountains after Novosibirsk and Yekaterinburg, and seventh by size nationally. Omsk acts as an essential transport node, serving as a train station for Trans-Siberian Railway and as a staging post for the Irtysh River. During the Imperial era, Omsk used to be the seat of the Governor General of Western Siberia and, later, of the Governor General of the Steppes. For a brief period during the Russian Civil War in 1918–1920, it served as the capital of the anti-Bolshevik Russian State and held the imperial gold reserves. Omsk serves as the episcopal see of the bishop of Omsk and Tara, as well as the administrative seat of the Imam of Siberia. The mayor is Oksana Fadina.

Vladimir Pavlovich Biryukov was a Soviet ethnographer, lexicographer, museum worker, archaeologist, historian, folklorist, and the author of over 30 books. He specifically studied the folklore of the Ural region of Siberia.