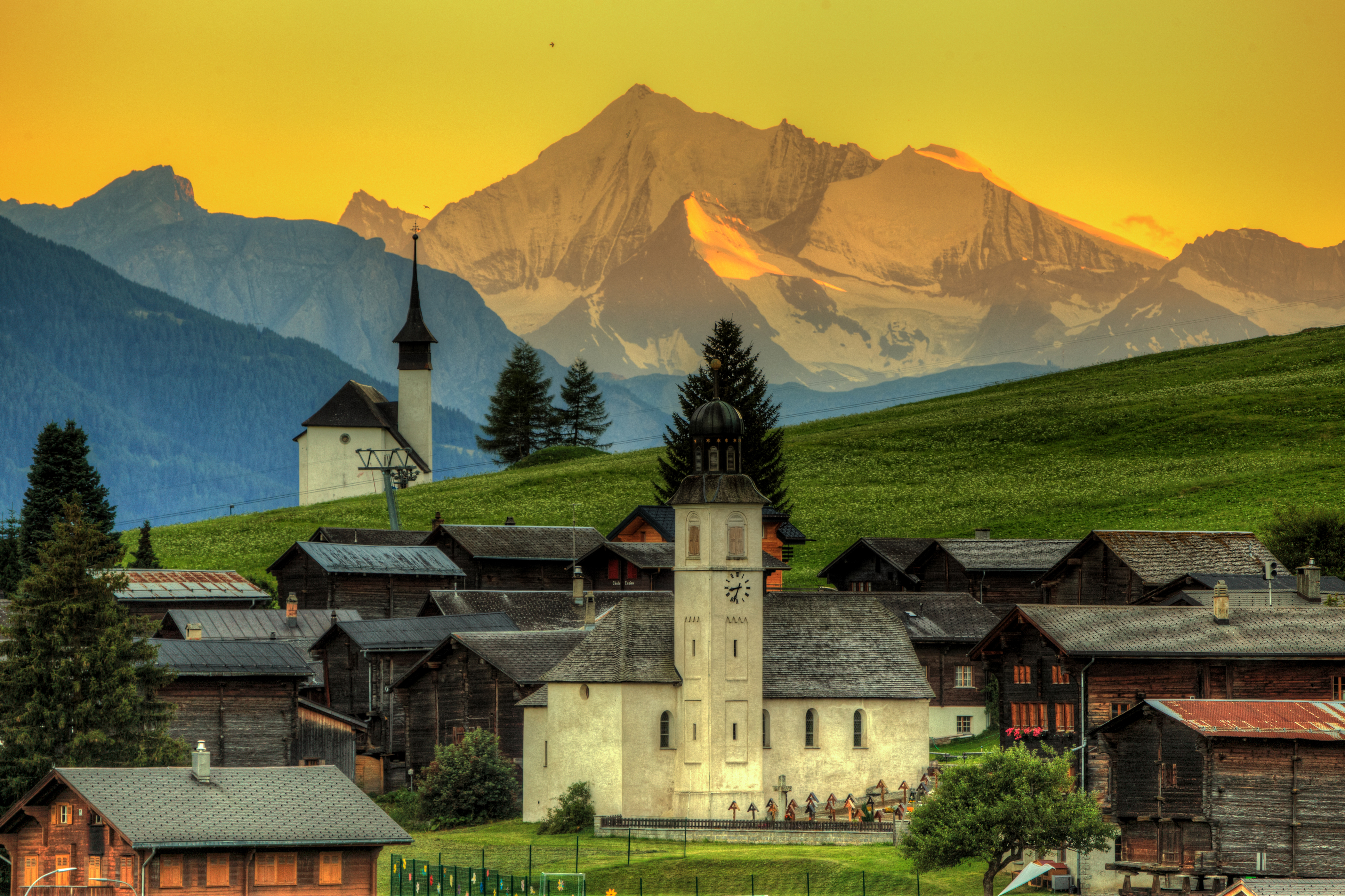 Switzerland, officially the Swiss Confederation, is a country situated at the confluence of Western, Central, and Southern Europe. It is a federal republic composed of 26 cantons, with federal authorities based in Bern. Switzerland is a landlocked country bordered by Italy to the south, France to the west, Germany to the north, and Austria and Liechtenstein to the east. It is geographically divided among the Swiss Plateau, the Alps, and the Jura, spanning a total area of 41,285 km2 , and land area of 39,997 km2 . While the Alps occupy the greater part of the territory, the Swiss population of approximately 8.5 million is concentrated mostly on the plateau, where the largest cities and economic centres are located, among them Zürich, Geneva and Basel. These cities are home to several offices of international organisations such as the headquarters of FIFA, the UN's second-largest Office, and the main building of the Bank for International Settlements. The main international airports of Switzerland are also located in these cities. The establishment of the Old Swiss Confederacy dates to the late medieval period, resulting from a series of military successes against Austria and Burgundy. Swiss independence from the Holy Roman Empire was formally recognized in the Peace of Westphalia in 1648. The Federal Charter of 1291 is considered the founding document of Switzerland which is celebrated on Swiss National Day. Since the Reformation of the 16th century, Switzerland has maintained a strong policy of armed neutrality; it has not fought an international war since 1815 and did not join the United Nations until 2002. Nevertheless, it pursues an active foreign policy and is frequently involved in peace-building processes around the world. Switzerland is the birthplace of the Red Cross, one of the world's oldest and best known humanitarian organisations, and is home to numerous international organisations, including the United Nations Office at Geneva, which is its second-largest in the world. It is a founding member of the European Free Trade Association, but notably not part of the European Union, the European Economic Area or the Eurozone. However, it participates in the Schengen Area and the European Single Market through bilateral treaties. Switzerland occupies the crossroads of Germanic and Romance Europe, as reflected in its four main linguistic and cultural regions: German, French, Italian and Romansh. Although the majority of the population are German-speaking, Swiss national identity is rooted in a common historical background, shared values such as federalism and direct democracy, and Alpine symbolism. Due to its linguistic diversity, Switzerland is known by a variety of native names: Schweiz [ˈʃvaɪts] ; Suisse [sɥis] ; Svizzera [ˈzvittsera] ; and Svizra [ˈʒviːtsrɐ, ˈʒviːtsʁɐ] . On coins and stamps, the Latin name, Confoederatio Helvetica – frequently shortened to "Helvetia" – is used instead of the four national languages. The sovereign state is one of the most developed countries in the world, with the highest nominal wealth per adult and the eighth-highest per capita gross domestic product. It ranks at or near the top in several international metrics, including economic competitiveness and human development. Zürich, Geneva and Basel have been ranked among the top ten cities in the world in terms of quality of life, with Zürich ranked second globally. In 2019, IMD placed Switzerland first in attracting skilled workers. The World Economic Forum ranks it the 5th most competitive country globally.

The Kunstmuseum Basel houses the largest and most significant public art collection in Switzerland, and is listed as a heritage site of national significance.Its lineage extends back to the Amerbach Cabinet, a collection of works by Hans Holbein purchased by the city of Basel in 1661, which made it the first municipally owned and therefore open to the public museum in the world. Its collection is distinguished by an impressively wide historic span, from the early 15th century up to the immediate present. Its various areas of emphasis give it international standing as one of the most significant museums of its kind. These encompass: paintings and drawings by artists active in the Upper Rhine region between 1400 and 1600, and on the art of the 19th to 21st centuries.

The Kunsthaus Zürich is an art museum in Zürich, Switzerland. After the Kunstmuseum Basel, it houses one of the most important art collections in Switzerland, assembled over the years by the local art association called Zürcher Kunstgesellschaft. The collection spans from the Middle Ages to contemporary art, with an emphasis on Swiss art.

The Foundation E.G. Bührle Collection is an art museum in Zürich, Switzerland. It was established by the Bührle family to make Emil Georg Bührle's collection of European sculptures and paintings available to the public. The museum is in a villa adjoining Bührle's former home.

The Museum of Fine Arts Bern , established in 1879 in Bern, is the museum of fine arts of the capital of Switzerland. Its holdings run from the Middle Ages to the present. It houses works by Paul Klee, Pablo Picasso, Ferdinand Hodler, Meret Oppenheim, Ricco Wassmer and Adolf Wolfli. The collection consists of over 3,000 paintings and sculptures as well as 48,000 drawings, prints, photographs, videos and films. In May 2014, the museum was named sole heir in the will of Cornelius Gurlitt, the German collector associated with the 2012 Munich artworks discovery. The authorities had found over 1,400 artworks, many of them suspected to be stolen from European Jews by the Nazis, in Gurlitt's homes in Munich and Salzburg. The museum was given six months to decide whether it would accept the bequest and its terms. The most important proviso required that the museum conduct research into the provenance of the paintings and make restitution where needed to the heirs of the original owners. The museum director, Matthias Frehner, pledged that it would do so if it accepted the bequest. The German government quietly urged the museum to accept the collection in order to provide a neutral place where research into its history could continue. Determining whether or not to accept required much deliberation on the part of the museum board, work by its legal team, and significant fundraising from Swiss donors, so that the museum would not be reliant on German funding that could taint the neutrality of the provenance research. In November 2014 the board voted to accept the collection.In August 2018, an episode of Fake or Fortune featured the director of the museum Dr Nina Zimmer asking the team to investigate what appears to be the sole British piece of art in the Gurlitt collection.

The Musée d’Art et d’Histoire is the largest art museum in Geneva, Switzerland.

The Kunst Museum Winterthur is an art museum in Winterthur, Switzerland run by the local Kunstverein. From its beginnings, the activities of the Kunstverein Winterthur were focused on "contemporary art" - first Impressionism, then Post-Impressionism and especially Les Nabis, through post-World War II and recently created works by Richard Hamilton, Mario Merz and Gerhard Richter.