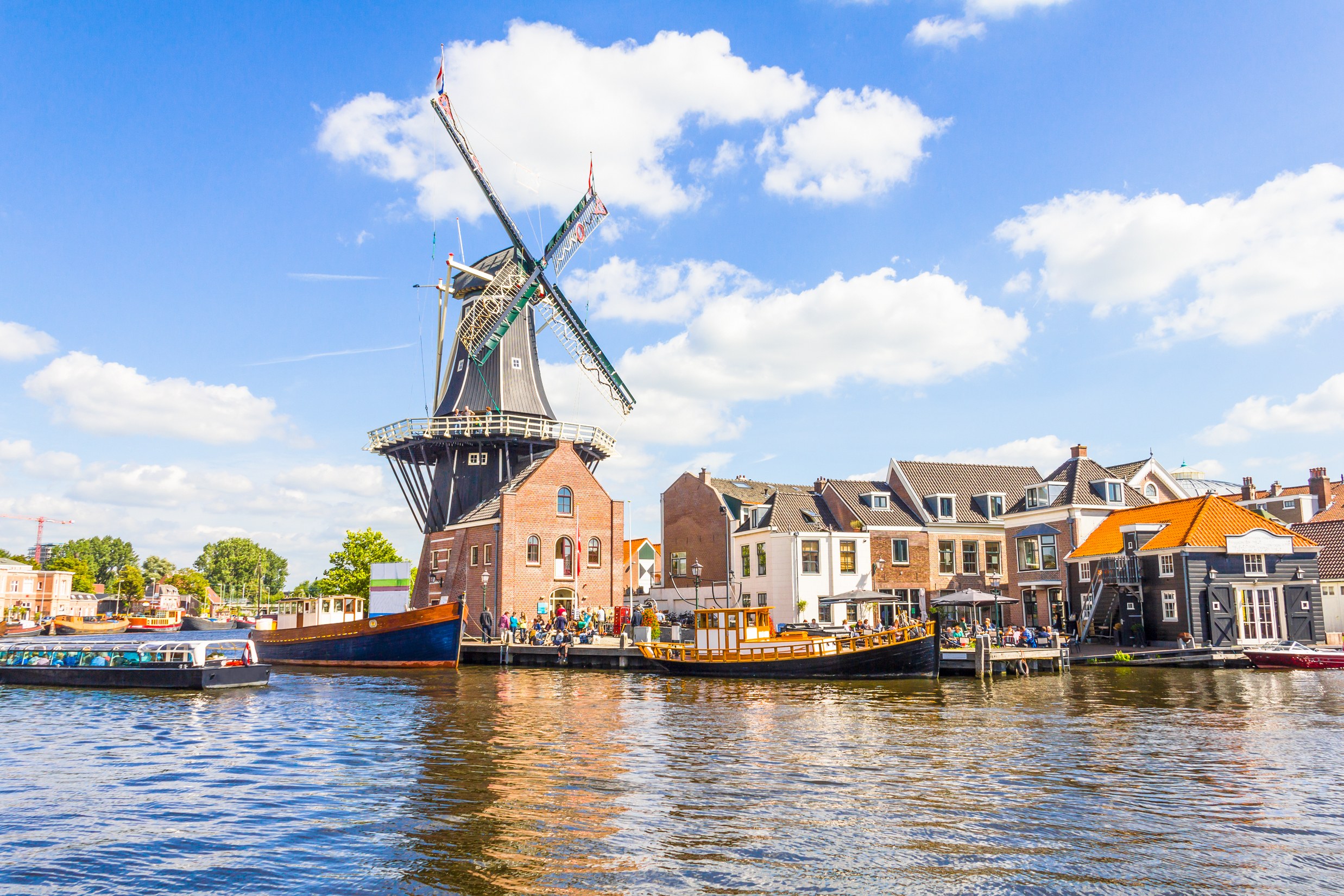 The Netherlands ), informally Holland, is a country primarily located in Western Europe and partly in the Caribbean, forming the largest constituent country of the Kingdom of the Netherlands. In Europe, it consists of 12 provinces that border Germany to the east, Belgium to the south, and the North Sea to the northwest, with maritime borders in the North Sea with those countries and the United Kingdom. In the Caribbean, it consists of three special municipalities: the islands of Bonaire, Sint Eustatius and Saba. The country's official language is Dutch, with West Frisian as a secondary official language in the province of Friesland, and English and Papiamentu as secondary official languages in the Caribbean Netherlands. Dutch Low Saxon and Limburgish are recognised regional languages , while Sinte Romani and Yiddish are recognised non-territorial languages.The four largest cities in the Netherlands are Amsterdam, Rotterdam, The Hague and Utrecht. Amsterdam is the country's most populous city and nominal capital, while The Hague holds the seat of the States General, Cabinet and Supreme Court. The Port of Rotterdam is the busiest seaport in Europe, and the busiest in any country outside East Asia and Southeast Asia, behind only China and Singapore. Amsterdam Airport Schiphol is the busiest airport in the Netherlands, and the third busiest in Europe. The country is a founding member of the EU, Eurozone, G10, NATO, OECD and WTO, as well as a part of the Schengen Area and the trilateral Benelux Union. It hosts several intergovernmental organisations and international courts, many of which are centered in The Hague, which is consequently dubbed 'the world's legal capital'.Netherlands literally means "lower countries" in reference to its low elevation and flat topography, with only about 50% of its land exceeding 1 metre above sea level, and nearly 17% falling below sea level. Most of the areas below sea level, known as polders, are the result of land reclamation that began in the 16th century. Colloquially or informally the Netherlands are occasionally referred to by the pars pro toto Holland. With a population of 17.4 million people, all living within a total area of roughly 41,800 square kilometres —of which the land area is 33,500 square kilometres —the Netherlands is the 12th most densely populated country in the world and the 2nd most densely populated country in the European Union, with a density of 521 per square kilometre . Nevertheless, it is the world's second-largest exporter of food and agricultural products , owing to its fertile soil, mild climate, intensive agriculture and inventiveness.The Netherlands has been a parliamentary constitutional monarchy with a unitary structure since 1848. The country has a tradition of pillarisation and a long record of social tolerance, having legalised abortion, prostitution and human euthanasia, along with maintaining a liberal drug policy. The Netherlands abolished the death penalty in Civil Law in 1870, though it was not completely removed until a new constitution was approved in 1983. The Netherlands allowed women's suffrage in 1919, before becoming the world's first country to legalise same-sex marriage in 2001. Its mixed-market advanced economy had the thirteenth-highest per capita income globally. The Netherlands ranks among the highest in international indexes of press freedom, economic freedom, human development and quality of life, as well as happiness. In 2019, the Netherlands had the eleventh highest economy as measured by GDP per capita. In 2019, it ranked tenth on the human development index and fifth on the 2019 World Happiness Index.

The Rijksmuseum ; English: National Museum) is a Dutch national museum dedicated to arts and history in Amsterdam. The museum is located at the Museum Square in the borough Amsterdam South, close to the Van Gogh Museum, the Stedelijk Museum Amsterdam, and the Concertgebouw.The Rijksmuseum was founded in The Hague on 19 November 1798 and moved to Amsterdam in 1808, where it was first located in the Royal Palace and later in the Trippenhuis. The current main building was designed by Pierre Cuypers and first opened in 1885. On 13 April 2013, after a ten-year renovation which cost € 375 million, the main building was reopened by Queen Beatrix. In 2013 and 2014, it was the most visited museum in the Netherlands with record numbers of 2.2 million and 2.47 million visitors. It is also the largest art museum in the country. The museum has on display 8,000 objects of art and history, from their total collection of 1 million objects from the years 1200–2000, among which are some masterpieces by Rembrandt, Frans Hals, and Johannes Vermeer. The museum also has a small Asian collection, which is on display in the Asian pavilion.

The Van Gogh Museum is a Dutch art museum dedicated to the works of Vincent van Gogh and his contemporaries in the Museum Square in Amsterdam South, close to the Stedelijk Museum, the Rijksmuseum, and the Concertgebouw. The museum opened on 2 June 1973, and its buildings were designed by Gerrit Rietveld and Kisho Kurokawa. The museum contains the largest collection of Van Gogh's paintings and drawings in the world. In 2017, the museum had 2.3 million visitors and was the most-visited museum in the Netherlands, and the 23rd-most-visited art museum in the world. In 2019, the Van Gogh Museum launched the Meet Vincent Van Gogh Experience, a technology-driven "immersive exhibition" on Van Gogh's life and works, which has toured globally.

The Kröller-Müller Museum is a national art museum and sculpture garden, located in the Hoge Veluwe National Park in Otterlo in the Netherlands. The museum, founded by art collector Helene Kröller-Müller within the extensive grounds of her and her husband's former estate , opened in 1938. It has the second-largest collection of paintings by Vincent van Gogh, after the Van Gogh Museum. The museum had 380,000 visitors in 2015.

The Mauritshuis is an art museum in The Hague, Netherlands. The museum houses the Royal Cabinet of Paintings which consists of 854 objects, mostly Dutch Golden Age paintings. The collections contains works by Johannes Vermeer, Rembrandt van Rijn, Jan Steen, Paulus Potter, Frans Hals, Jacob van Ruisdael, Hans Holbein the Younger, and others. Originally, the 17th century building was the residence of count John Maurice of Nassau. It is now the property of the government of the Netherlands and is listed in the top 100 Dutch heritage sites.

Museum Boijmans Van Beuningen ]) is an art museum in Rotterdam in the Netherlands. It is located at the Museumpark in the district Rotterdam Centrum, close to the Kunsthal and the Natural History Museum. The museum opened in 1849. It houses the collections of Frans Jacob Otto Boijmans and Daniël George van Beuningen . In the collection, ranging from medieval to contemporary art, are works of Rembrandt, Claude Monet, Vincent van Gogh, and Salvador Dalí. In 2013, the museum had 292,711 visitors and was the 14th most visited museum in the Netherlands.

The Frans Hals Museum is a museum located in Haarlem, the Netherlands. The museum was established in 1862. In 1950, the museum was split in two locations when the collection of modern art was moved to the Museum De Hallen . The main collection, including its famous 17th-century Frans Hals paintings, for which the museum is named, is located in the former Oude Mannenhuis on the Groot Heiligland. The museum was founded in 1862 in the newly renovated former Dominican church cloisters located in the back of the Haarlem city hall known as the Prinsenhof, and when it needed more space, it moved to the recently vacated location of the town orphanage in 1913. The collection is based on the large number of paintings owned by the City of Haarlem, which includes over 100 artworks seized from Catholic churches in the 1580s after the Protestant Reformation, and Haarlem art rescued from demolished local buildings from the 15th century onwards. In 2018 the museum re-merged with Museum De Hallen to form a single museum called the Frans Hals Museum with two locations: Hof and Hal .

Teylers Museum is an art, natural history, and science museum in Haarlem, Netherlands. Established in 1778, Teylers Museum was founded as a centre for contemporary art and science. The historic centre of the museum is the neoclassical Oval Room , which was built behind the house of Pieter Teyler van der Hulst , the so-called Fundatiehuis . Pieter Teyler was a wealthy cloth merchant and banker of Scottish descent, who bequeathed his fortune for the advancement of religion, art, and science. He was a Mennonite and follower of the Scottish Enlightenment.

The Stedelijk Museum Amsterdam , colloquially known as the Stedelijk, is a museum for modern art, contemporary art, and design located in Amsterdam, Netherlands.The 19th century building was designed by Adriaan Willem Weissman and the 21st century wing with the current entrance was designed by Benthem Crouwel Architects. It is located at the Museum Square in the borough Amsterdam South, where it is close to the Van Gogh Museum, the Rijksmuseum, and the Concertgebouw.The collection comprises modern and contemporary art and design from the early 20th century up to the 21st century. It features artists such as Vincent van Gogh, Wassily Kandinsky, Ernst Ludwig Kirchner, Marc Chagall, Henri Matisse, Jackson Pollock, Karel Appel, Andy Warhol, Willem de Kooning, Marlene Dumas, Lucio Fontana, and Gilbert & George.In 2015, the museum had an estimated 675,000 visitors.

The Centraal Museum is the main museum in Utrecht, Netherlands, founded in 1838. The museum has a wide-ranging collection, mainly of works produced locally. The collection of the paintings by the Northern Mannerist Joachim Wtewael is by a long way the largest anywhere in the world. Other highlights are many significant paintings by the Utrecht Caravaggisti, such as Gerard van Honthorst and Hendrick ter Brugghen. Both of them travelled to Rome in the early 17th century to study the works of the Italian master Caravaggio. In the previous generation, as well as Wtewael, Abraham Bloemaert and the portraitist Paulus Moreelse were the most significant Utrecht painters, with Jan van Scorel still earlier.